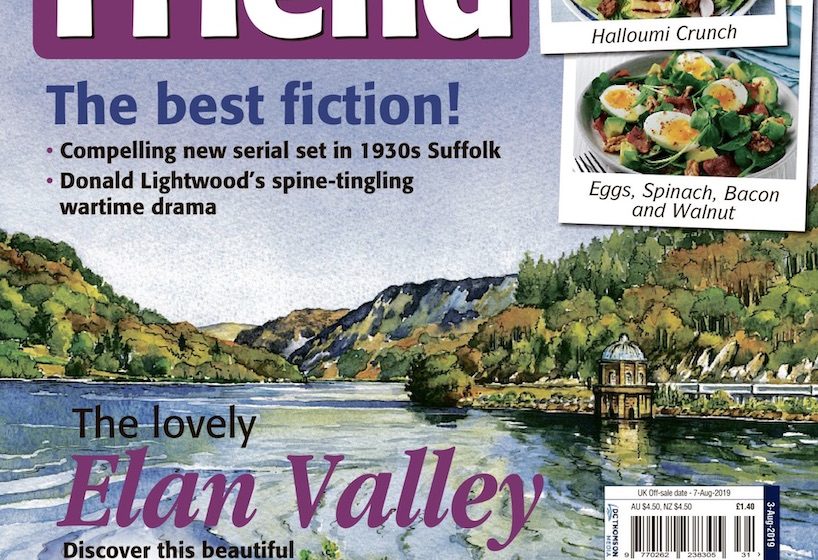 This week’s issue of The People’s Friend has my Elan Valley travel piece as the front cover image. If you’ve never been to the area before, I hope it whets your appetite – or should I say ‘wets’ your appetite 🙂

As is always the case, when you go off and explore an area you can never include everything in the finished article, so here are some photos that didn’t make it into the published feature.

I visited the area back in April, which turned out to be one of our drier months. It’s in stark contrast to the news headlines today of the poor people in my namesake town of Whaley Bridge (thank you BBC for pronouncing it correctly). Having been to Elan Valley, and learned about how dams were originally constructed, it’s easy to see why the authorities are taking the situation in Derbyshire so seriously.

But as you can see from the photo below of Caban Coch dam, the weather was so dry, not only was the reservoir level so low that water wasn’t flowing over the top, but very little was flowing into the River Elan at the bottom.

Yet, when I climbed up the side of the dam (don’t worry – there is a path!), I was greeted by plenty of water behind the dam … something I’m sure the people of Birmingham would have been thankful for. (The Elan Valley supplies fresh water to Birmingham, as well as parts of North Wales.)

Caban Coch reservoir is larger than you think, something that isn’t obvious until you begin to climb up the adjacent hills for a better view. Being told that Caban Coch reservoir can hold 99,499,000 cubic metres is one thing … but seeing it puts it into perspective!

The reason for wandering along the side of Caban Coch reservoir was to take some photos of the dam that engineer Barnes Wallis destroyed as part of his experiments for the Dambuster raids. Elan Valley’s connection to this story is pivotal. Without the knowledge Wallis gained here by blowing up the dam, he would not have been able to go on and develop the bouncing bomb. It was these experiments here that revealed where the bomb needed to explode … once it had bounced its way across the top of the water.

Despite being in the middle of nowhere (well, near Rhayader, Powys, to be precise) it’s easy to forget how industrial this area would have been at the turn of the 20th century, while the dams were being built. This iron suspension bridge was built by the Birmingham Water Company to help workers get from one side of the River Elan where their accommodation was, to the construction site on the other side.

Although too dangerous to use, it’s been deemed as historically important and won’t be dismantled. Just think of all the people who’ve crossed it over its years of service.

Once the construction workers were no longer needed, so their temporary accommodation was taken down, and replaced by one of the few Arts and Craft style villages to be found anywhere in mid-Wales. Although workers weren’t needed to build the dams any more, the Birmingham Water company still needed people to operate the waterworks – hence the new village. (It also replaced the original Elan village that now sits under 99,499,000 cubic metres of water, on the other side of the dam.

Once of the original buildings to be flooded in Elan was the church, and so a replacement church was built. There’s a small car park near Nantygwyllt Church, and it’s worth exploring. There are several poignant reminders inside of those who lost their lives constructing a facility that continues to give the people of Birmingham clean, fresh water today.

The ornate, white oil lamps were salvaged from the original church, so there’s still a thread of history linking this new church, with the one it replaced.

Do look up inside and see if you can spot the carved faces of some of the Birmingham Water Corporation’s Board of Directors, who now look down upon worshippers and visitors. I’m not sure the sculptor caught their best side!

Garreg-Ddu dam is part dam and part bridge. It carries the road across the reservoir, but submerged between the water level is another dam. It hold back the water in extreme dry periods, because behind this dam is the Foel Tower, the start of the pipeline to Birmingham. Without this dam the water level could drop below the intake area, thus cutting off Birmingham’s supply. So, even though on my visit both Caban Coch and Garreg-Ddu reservoirs were the same level, during extreme dry periods, Caban Coch’s water level can fall drastically. In drought years the foundations of the original Elan village can be seen.

It’s worth getting out and exploring each of the dams, for there is lots of information about. Here’s proof of what her Majesty the Queen was doing at ten to one on the 23rd October 1952!

The largest dam in the entire valley is Claerwen Dam – built some 50 years after the original Victorian dams. It’s an imposing structure, whether you’re at the bottom, or the top. And such was the development in dam technology, this huge monster is actually doing the job of three dams the Victorians planned to build.

Behind it lies 10,625 million gallons of water.

I can recommend Penbont Tea Rooms if you’re in the area. I was parched when I arrived, but a huge pot of Welsh Tea soon changed that. (And the jacket potatoes were scrummy!)

Pen Y Carreg is another dam in the series of six there and I couldn’t help but laugh at the information panel there. If you look at the cut-away illustration you’ll see that the dam is built primarily of concrete with plums. (I assumed plums is a technical term for something, rather than the fruit, and if you’re interested it means it’s got added bits in it, small rocks, to give it added strength.)

Craig Goch is another imposing structure, and is 104 feet thick at its base. It’s a popular place for day trippers to come and park and then go off exploring, either on foot or bicycle. (There are some good cycle tracks around the reservoirs.) If you’re lucky, there’ll be an ice-cream van to keep you cool and refreshed on a sunny day.

From here, the single track road leads onto the spine of the Cambrian Mountains, to reach a T-junction. Turn right to go back to Rhayader, or left to Aberystwyth, along the mountain pass. I was sorely tempted to turn left, but it was getting near to the end of the day, so in the end I had to turn right. The mountain pass road can wait for another time.