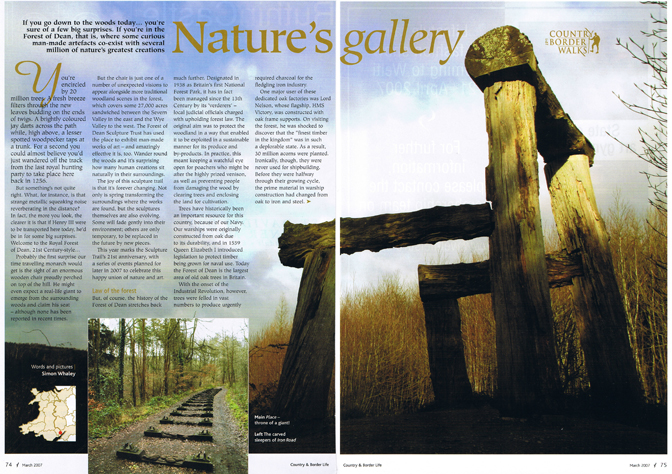 I’m surrounded by 20 million trees. A fresh breeze filters through the new leaves budding on the ends of twigs, whilst a strange, metallic, squeaking noise reverberates in the distance. A brightly coloured jay darts across the path in front of me and a lesser spotted woodpecker taps a trunk high above. I could be following in the footsteps of Royalty, although the last time a reigning Monarch hunted in this Royal Hunting Forest was back in 1256. If Henry III happened to wander through today, he’d be in for a big surprise. There’s much more to this forest than first meets the eye, and the ear, and I was in search of the source of that metallic noise. Welcome, to the Royal Forest of Dean.

The first surprise is the enormous wooden chair, proudly perched on top of the hill, ready and waiting for any passing giant. Gazing across the wide valley to the forested hills beyond, I desperately search for a passing giant, but none comes my way. Pity.

Sandwiched between the Severn Valley, in the east, and the Wye Valley, to the west, the Forest of Dean has 27,000 acres of woodland. Designated as Britain’s first National Forest Park in 1938, records demonstrate that it has been managed by its ‘Verderers’ since the 13th century. Verderers were local judicial people charged with upholding Forest Law. This was designed to protect the woodland in a way that enabled them to exploit it, in a sustainable manner, for its produce and by-products. In practice, this meant keeping a watchful eye open for poachers taking the highly prized venison, and preventing people from damaging the wood by clearing trees and enclosing the land for cultivation.

I owe the sight before me to the sea. Trees have historically been an important resource for this country, thanks to our Navy. Our fleet of warships were originally constructed from oak because of its durability, so much so that in 1559, Queen Elizabeth I introduced legislation to protect timber being grown for naval use. However, with the birth of the Industrial Revolution, trees were felled to produce urgently required charcoal, for the fledgling iron industry.

Charred History
Stepping into the upper confines of Cannop Brook, my eyes feast on the creation called Black Dome. In recognition of the charcoal industry that once flourished here, 900 pieces of charred larch have been installed, creatively, into the leaf-covered ground, ready to decay and return back to its basic living organisms once more.

One traditional heavy user of these dedicated oak factories was Lord Nelson, whose flagship, HMS Victory, was constructed with oak frame supports. When visiting the forest, he was shocked to discover that the “finest timber in the kingdom” was in such a deplorable state. As a result, 30 million acorns were planted, which ironically, were never used for shipbuilding. Their legacy is the fresh air I breathe now, surely. Before they were half way through their growing cycle, the prime material in warship construction had changed from oak to iron and steel.

Remnants of this industrial past still litter the forest. As I creep closer towards the mysterious metal squeaking sound, it’s obvious that my path has previously served its time as a railway line. And here, a few steps on, is a row of several sleepers, each with its own memorial to this environment carved between the metal rail callipers. Such was the size of the coal and iron industry here during the 17th century, the Forest of Dean laid claim to the highest density of iron furnaces and forges to be found anywhere in the UK.

A sudden clap of air in the canopy above me catches my attention as I scan the treetops for the perpetrator. Bending my knees to peer through a gap in the branches reveals the brown bulk of a buzzard launching itself into the sky. Despite the occasional squeak of the unnatural clanging sound luring me to its source, the wildlife here is clearly more bothered by my own presence.

Spring activity in the forest is both natural and man made. The floor of the woods richly rewards bluebell seekers in search of some late spring colour, as swathes of one of Britain’s favourite flowers, carpet the canopy covered ground. Over 30 species of butterflies flit from flower to flower along the butterfly rides, whilst March is the time when rangers and volunteers coppice areas of hazel and sweet chestnut, and clear areas of scrubland.

Oak Stronghold
Exploring the largest area of old oak trees in Britain, means marvelling at sessile oaks. The acorns of these oaks are short and stubby and have no stalks. The other species of oak native to Britain is the pedunculate oak, which has long stalks on its acorns. There are some pedunculate oaks in the Forest of Dean, but it’s the taller sessile oaks, with their straighter trunks and branches, that proliferate.

Could this eerie noise, drawing me further into the forest, be coming from an oak tree I wonder? The Greek botanist Theophrastus said, “the oak bears more things beside its fruit than any other tree.” He wasn’t wrong. Today, botanists believe an oak tree can support over 350 different varieties of insect and, when it has died, provide support for over 200 varieties of fungi.

Setting out from the Visitor Centre at Beechenhurst Lodge, formally the site of a colliery, the Forest of Dean has led me into its heart and unveiled some of its more imaginative sights, alongside more traditional woodland scenes. The Forest of Dean Sculpture Trust has used the heart of the forest as a venue for exhibiting man-made objects. Wander round the woods and it’s surprising how many human creations sit naturally into their surroundings. The joy of this trail is that it is forever changing. Not only is spring changing the surroundings that the sculptures are cradled within, but the sculptures themselves are also evolving. Some will fade gently into their environment, others are only temporary, and later removed, ready to be replaced by new pieces. This year marks the Sculpture Trail’s 21st anniversary, and events planned for later in the year demonstrate that this combination of nature and man made art has a future.

But as I make my final steps along the damp, pungent earthy path, getting ever closer to the unexplained noise, the metallic screeching gives way to child-like squeals of delight. Finally, as I turn the corner, a sculpture designed to be used and enjoyed swings into view, and the secret is revealed. There, hanging majestically from the branch of a tree is … well … I don’t know whether I should tell you really. After all, I wouldn’t want to spoil the surprise!