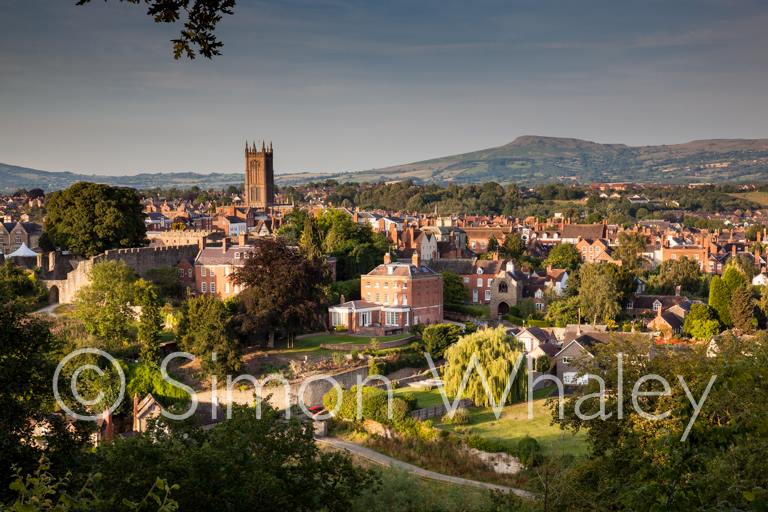 Climbing to the top of a church tower and surveying the surrounding parish landscape offers a God-like perspective of the local community. In rural towns and villages the church often retains its presence at the physical heart of the neighbourhood, in addition to its spiritual placement. Ludlow’s St Laurence’s Church, in South Shropshire’s rural landscape, is one such building. Perched on a hill, around which the sedate waters of the River Teme saunter by, the 132 feet tower punches its way into God’s heaven, like a rural version of London’s The Shard. Travel south along Shropshire’s arterial A49 and the square tower acts as a beacon, drawing the traveller into Ludlow’s heart.

Despite this lighthouse effect, approaching St Laurence’s from the town centre requires an ability to locate treasure at the bullseye of a maze created with eight-feet high hedges, when tall Georgian and other period façades block all sense of positioning from you.Those who locate the Buttercross are only moments away from a narrow passageway, pinched between two shops, that cuts through to the church. There’s an air of Harry Potter and its Platform 9 ¾, for outside the Buttercross on market day (of which there are at least three every week), the pavements are pounded by locals and tourists going about their day, yet a surreptitious side-step down the short alleyway brings you into the silent sanctity of St Laurence’s.

Step through its huge doors, into the porch, then pass though the inner doors, and the sheer size of St Laurence’s swallows you. It is the largest parish church in Shropshire and one of the largest and finest in the UK. It’s cathedral-like proportions are overwhelming.

At the small shop in the north aisle, visitors can pay a few pounds to gain access to the tower. Health and safety dictates a monitoring system, so I’m handed a three-inch diameter wooden ring with a luxuriously deep blue ribbon looped through it, to hang around my neck. It’s as though I’ve been awarded a medal before tackling the task. While the ascension is no Olympic feat, it has not escaped my attention that any minute now I shall start climbing the tallest structure in Ludlow.

A volunteer guides me along the north aisle, past the north transept, and into St John’s Chapel, where she then veers towards a tiny door set several steps up in the interior stone wall. She inserts a large metal key into the lock and twists. “I have to lock you in,” she says. She beams at me. “But don’t panic, for there’s a latch on the other side you can pull when you’re ready to come out.” At least I’m in control of when I can escape. 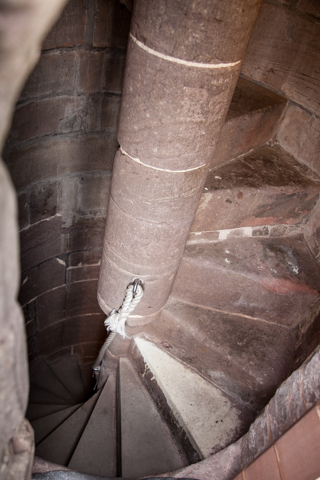 Stepping up in through the doorway, the contrast is overwhelming. This vast church has the narrowest of spiral staircases. The steps were built at a time when people’s feet were smaller. Inside my shoes it feels as though there’s only room for my toes to connect with each tapering step. The balls of my feet hang in mid-air, anticipating the next step will be wider, yet it isn’t. It seems that fifteenth century church builders didn’t consider the physical development of man over the next five hundred and fifty years.

Suddenly, the door slams behind me and the echo rushes past,, dashing up the spiral staircase. I begin the dizziness-inducing climb, grasping the coarse, thick rope handrail, attached to the central stone column. My shoes clomp against the stone steps as I corkscrew my way towards the top. Occasionally, I glimpse light, as the spiral steps spin me past a narrow arrow-slit window, with views stretching deep into St Laurence’s nave. Only now do I appreciate the cavernous space contained under the church’s roof.

I continue my circular anti-clockwise climb, which, despite being cocooned within a stone tube, is suddenly shaken. BONG! One of the tower’s ten bells chimes the quarter hour. As the noise reverberates up and down the cylindrical tower, my left hand feels the sound waves passing through the central stone column. Now is not the time to hang about. In fifteen minutes the midday peal will begin.

Round and round my journey continues until the stairway opens out. I sense more space. There’s a door, set at the end of a short corridor that feels more like a tunnel. Squeezing in, I spot a narrow letterbox slit in the doorway and press my face against it. Aha! The source of the noise is revealed. Housed in their solid oak and red-metalled frame, I see each of the ten bells resting until their allotted time. Time that’s now ticking … 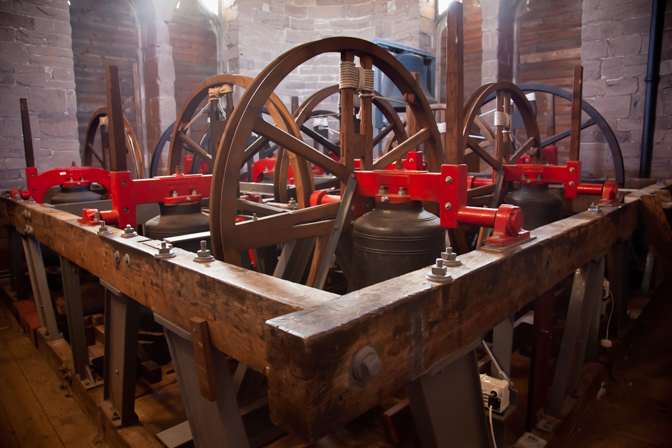 I force my way back to the staircase and continue my spiralling climb. Now the arrow-slit windows offer views outside. I’m higher than the roofline, as my feet and aching shins push me skywards. Corkscrewing towards the clouds there’s a sweetness in the air, pushed along by a cool breeze. Fresh air. Lights breaks through the semi-darkness that has engulfed me since the tower’s bottom door slammed shut behind me. A few more steps and then … yes! There it is. The top. Daylight. A small wooden door opens onto the top of the tower. Squeezing through the gap, because it’s tighter than it looks, my feet step out onto a narrow wooden-slatted boardwalk that circumnavigates the four walls of the tower. In the middle, a spire thrusts into the sky, topped with a copper lightning spike, which two starlings have adopted as a perch. 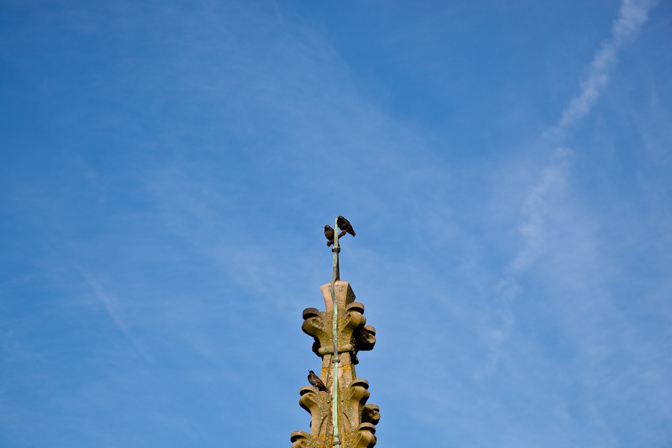 I step along the boardwalk and, to my left, through a gap in the crenelated wall, I’m rewarded with an unusual view of The Feathers Hotel. Its tiles and timber-framed construction look solid, even from this angle, but then it has been serving the local community since the 17th century. I wonder if the New York Times saw it from this angle when it described it as, ‘the most handsome inn in the world.’ 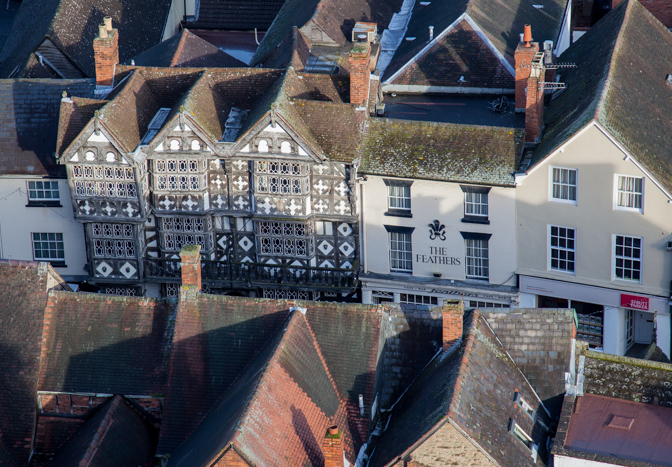 Four steps along the boardwalk brings me to the south-facing wall. If ever you wanted evidence that Ludlow has over 500 listed buildings, many of which are built on a medieval grid structure, this is the viewpoint to prove it. Chimneys of different styles thrust up towards me, some short and squat, others tall, slender and ornate. Why did medieval craftsmen finish chimneys and roofs with ornate finials when no one on the ground could see them? It only adds to the sense of wonder. Only those of us who have clambered these steps can be rewarded with this view. 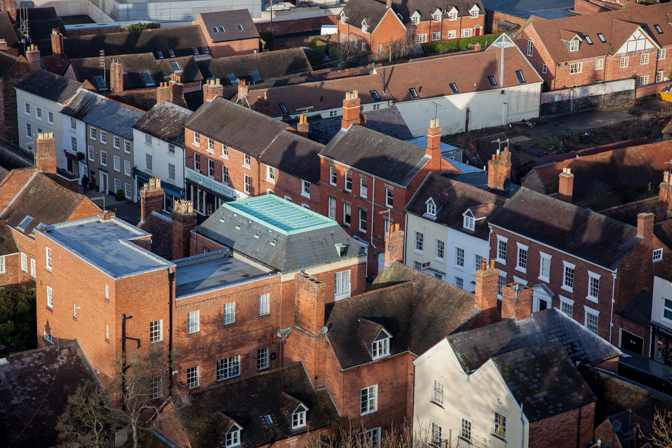 Off to my right, Broad Street cuts through the roofline. Only at its furthest distance can I make out the grey tarmac ribbon that takes residents away from the town centre, using Broad Gate, the only one of Ludlow’s five gateways to survive. Broad Street’s roofline, from Broad Gate back to the town centre, steps up, then down, then back up again, in its haphazard way. Presumably the taller properties were built by Ludlow’s wealthier wool or glove merchants of the time. 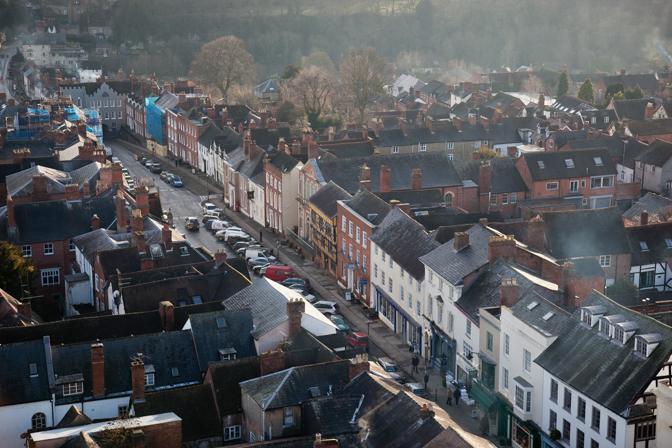 I turn ninety degrees and make my way west, to gaze across the market square and Ludlow’s other dominant feature: the Norman castle. Today it bustles with visitors and tourists and plays host to festivals and events. It’s easy to imagine it thronging with civil servants between the 15th and 17th centuries, when it was the administrative centre for Wales and the English counties of Shropshire, Herefordshire, Worcestershire and Gloucestershire. 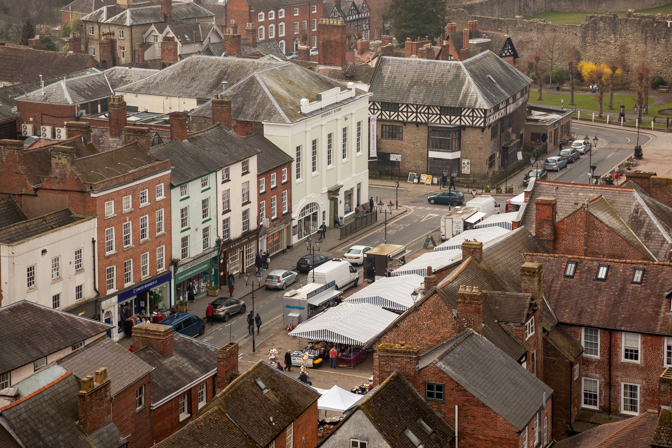 I peer over the edge and can see the almshouses built at St Laurence’s feet by a wealthy tradesman in the 16th century. The three storyed building I can see though dates from the 18th century, when it had to be rebuilt. The original building had deteriorated so much the inhabitants were frightened for their lives such was the decay of the internal structure. 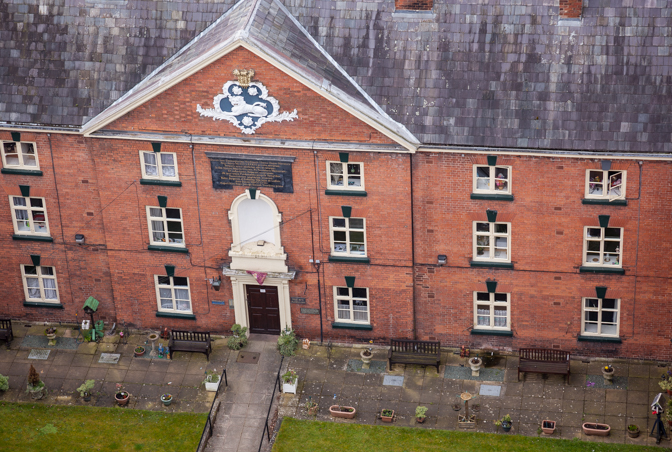 To the left is the cupola crowning the Buttercross, once the official centre of the town. Only now do I note the guilded gold weathervane, with its feathery tail crowning its top. Today it points across the castle to the heavily wooded Mortimer Forest that stretches towards Wales.

A few more steps and I complete the square circuit. Now my eyes gaze northwards, over the main road of Corve Street, where the medieval roofline is interrupted by the angled lines of the Ludlow Museum and Resource Centre, and then, further down, the wave-like rollercoaster ridge that tops Tescos. Behind this, the faint noise of bogeys clattering across the joins of railway tracks catches my attention, and I spot the sage-coloured carriages of Arriva Train Wales’ service from Manchester to Cardiff. The tannoy system spews information, although from where I’m standing it’s an unspecific crackling and buzzing noise. Those on the platform hear of the journey yet to come: Leominster, Hereford, Abergavenny, Pontypool, Cwmbran, Newport and Cardiff. 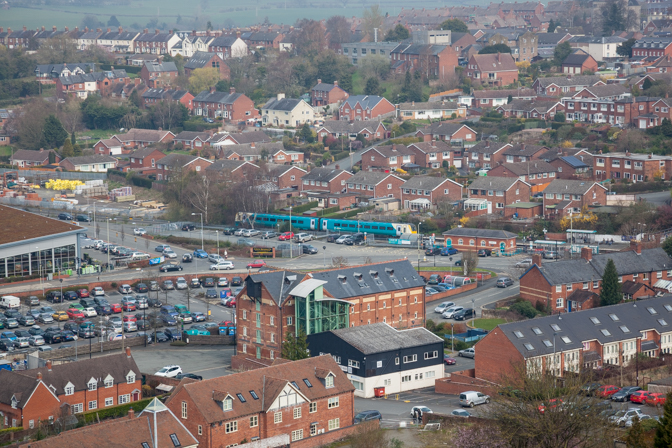 From this vantage point, no matter which way you look, it’s easy to see how Ludlow has retained its character. The nearest motorway is a straight 25 miles away, as the starlings still sitting above my head would testify. There is no other major conurbation as far as the eye can see: just rolling hills, animals grazing in fields, and a dense forest, dark enough to hide the mysterious long-haired fallow deer.

Ludlow is recognised as a Slow Town; a place where food is grown and produced the traditional way: not processed and mass manufactured. It’s far enough away from major cities and other influences to be able to do its own thing. And standing here, above it all, it’s clear from this perspective that it does it well.

The God-like overview is overwhelming. It stretches across counties and deep into Wales. It also allows me to look back through time: at least a thousand years. Should the people who built this tower retrace their steps today, there’s a lot about this view they would recognise, although there have been some changes, but the lie of the land, the trees of Mortimer Forest, the incline of Titterstone Clee Hill and the medieval buildings beneath me would be enough for them to recognise their home.

And it’s all yours for a few pounds, and the necessary energy to climb 200 claustrophobic steps. It may only be a short journey, from the bottom to the top of the tower, but it’s a journey filled with history and wonderment. I think I’ll spend a few more minutes gazing across this Borderland panorama. According to my watch, the eight-bell midday peal is about to start any minute now. 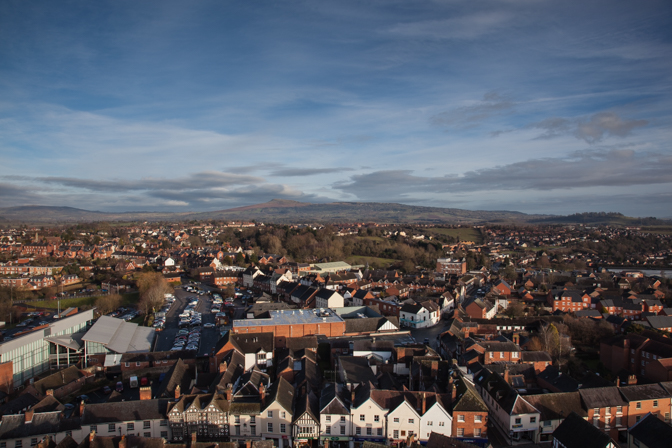 One thought on “Spiralling Closer To Heaven”