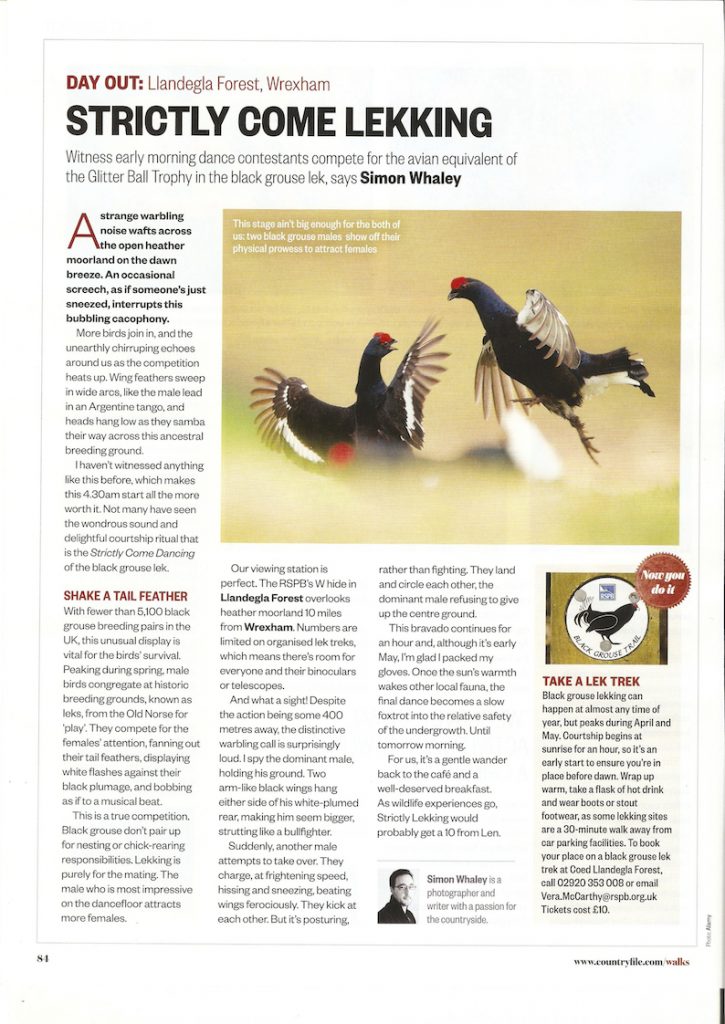 A strange warbling noise wafts across the open heather moorland on the fresh, dawn breeze. An occasional screech, as if someone’s just sneezed, interrupts this bubbling cacophony.

More birds join in, and the unearthly chirruping echoes around us as the competition heats up. Wing feathers sweep in wide arcs, like the male lead in an Argentine Tango, and heads hang low as they samba their way across this ancestral breeding ground.

I’ve never witnessed anything like this before, which makes this morning’s 4.30 start all the more worth it. Not many have seen the wondrous sound and delightful courtship ritual that is the Strictly Come Dancing of the Black Grouse Lek.

With fewer than 5,100 Black Grouse breeding pairs in the UK, this unusual display is vital for the birds’ survival. Peaking during spring, male birds congregate at historic breeding grounds, known as leks, and compete for the females’ attention, fanning out their tail feathers, displaying white flashes against their black plumage, and bobbing as if to a musical beat.

This is a true competition. Black Grouse don’t pair up for nesting or chick-rearing responsibilities. Lekking is purely for the mating. The male who struts his stuff on the dance floor the best attracts more females.

Our viewing station is perfect. The RSPB’s Llandegla Forest hide overlooks the heather moorland of Esclusham Mountain, ten miles from Wrexham. Numbers are limited on organised Lek treks, which means there’s room for everyone and their binoculars or telescopes. And what a sight! The managed moorland in front of us is home to approximately half of the Welsh Black Grouse population.

Despite the action being some 400 metres away, the distinctive bubbling, warbling call is surprisingly loud. Through binoculars, I spy the dominant male, holding his ground. Two arm-like black feathers hang either side of his white-plumed rear, making him seem bigger, strutting like the bullfighter in a paso doble. Suddenly, another male attempts to take over. They charge, at frightening speed, hissing and sneezing. Their wings beat ferociously. They thrust their feet forward, and kick out at each other. But it’s posturing, rather than fighting. They land and circle each other, the dominant male refusing to give up the centre ground.

This bravado courtship ritual continues for an hour and, although it’s early May, I’m glad I packed my gloves. Once the sun’s warmth wakes the other local fauna, the final dance becomes a slow foxtrot into the relative safety of the undergrowth. Until tomorrow morning.

For us, it’s a gentle wander back through the Crossbill-populated woods and past Pendinas Reservoir, to the cafe and a well-deserved breakfast. As wildlife experiences go, Strictly Lekking would probably get a ten from Len.

Black Grouse lekking can happen at almost any time of year, but activity peaks during April and May. Courtship begins at sunrise for about an hour, so it’s an early start to ensure you’re in place before dawn. Wrap up warm, and wear walking boots or stout footwear, as some lekking sites are a 30-minute walk away from car parking facilities.

Black Grouse are resident in mid and north Wales, the Cumbrian Pennines, Southern Scotland and the Scottish Highlands. If you know of lekking sites in these areas, always watch from a stationary vehicle, parked at least 100 metres away. Avoid starting the engine again until the lek has ended (anything up to two hours after dawn). Have a flask of hot drink to hand!

The Llandegla Black Grouse walk is approximately 2 miles (3.5km), and waymarked with the Black Grouse logo. From the visitor centre it climbs gently into the upland spruce plantation, and onto the open moors, to the RSPB’s hide, before returning into the woodland, and dropping pack past the Pendinas Reservoir.