Gathered together in my Teatime Tales anthologies are a collection of my short stories first published in a variety of magazines, such as Take a Break, Woman’s Weekly Fiction Special, The People’s Friend, The Weekly News and more. 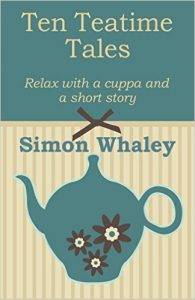 A collection of ten short stories by Simon Whaley, previously published in UK and Australian magazines, ideal for taking time out to read with a relaxing cup of tea (or whatever your beverage of choice is).

1. Chief Suspect Mickey MouseWho is the mysterious Mickey Mouse masked robber, terrorising bank staff, and will Detective Inspector Jane Newman stop them from striking again?2. Blindingly FoggyLooking for a lost dog in the park on a foggy morning isn’t easy.3. Potato Waffles and Syrupy SocksA Valentine’s Day breakfast with a difference. Love works in mysterious ways.4. Jungle JaneHer mean boss was teaching her to be resourceful. Jane was a fast learner.5. Open HouseThere seemed to be no end of deceitful people turning up on Patricia’s doorstep.6. Basket BingoSpaghetti, pasta sauce and wine – According to Jules’s Bingo Card Rob was already taken. So why was he so interested in the contents of her shopping basket?7. On Her Majesty’s Secret ServiceThere are some secrets that should be shared fully, and others that shouldn’t. 8. A Library Full of MurderReginald Crackenthorpe had been murdered. The question was, which member of the Lower Fenbury Murder Book Club had killed him?9. The Wedding CrasherLaura hates weddings. So does Zac. With so many mishaps behind them what could go wrong this time?10. Flower ThiefWho’s responsible for kidnapping Geoffrey’s petunias, and why is it upsetting his wife, Rose? 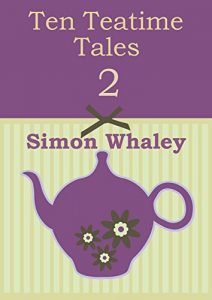 Dan’s having doubts about his wedding day and asks the vicar to lie for him. Is this pre-wedding nerves, or is Dan looking to walk out on his bride?

Sarah hated dealing with tradesmen, especially those who failed to put anything in writing. But then, two can play at that game, can’t they?

What a Dough Nut was first published in The Weekly News

Becky hopes a trip to the audiology department will sort out Grandad’s ears. It does, but not with the hearing aid Becky is expecting.

Phil and Beth are looking for the perfect property. The estate agent wants them to focus on location, but Phil and Beth want both. Will they find their dream property?

The Right Location was first published in The Weekly News

5. The Icing On The Cake

Veronica Ventura is not a happy woman. All she wanted was 60 cupcakes decorated in pale blue icing for her daughter’s wedding. Who’d have thought duck-egg blue icing could have such dire consequences?

You have a job for life when you’re promoted to the role of Head Butler. But the Head Butler’s job isn’t called Dead Man’s Shoes for nothing.

A Job For Life was first published in The Weekly News

Connie’s 95th birthday surprise has more excitement than planned. Can she encourage her great granddaughter to spread her wings?

Fledglings was first published by alfiedog.com

Donna’s got a dilemma. Where’s she going to put everyone, when Aunt Margaret won’t be seen dead next to Neville?

The Seating Plan was first published in The Weekly News

Melanie hates the dentists, but can’t get out of this appointment. Only when she takes her place in the dentist’s chair does she appreciate the benefit of having those awful braces all those years ago.

The Perfect Smile was first published in The Weekly News

Veronica Ventura is at it again, only this time she’s writing to the golf club secretary to explain why her charity fundraising event didn’t quite go to plan. 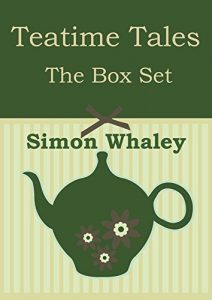