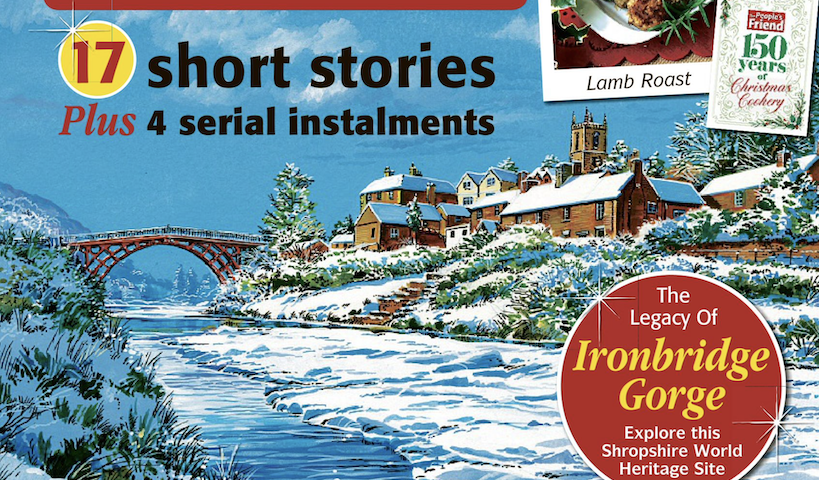 Inside the Museum of the Gorge, there’s a fascinating scale model of the Gorge, and the Bridge, as it looked when the bridge was first built in 1779. The attention to detail is amazing, and I could have spent hours just looking at the model.

The Museum of the Gorge also has a large illustration of one of the original paintings created soon after the bridge was opened – which shows the iron had been painted in this reddy-brown colour. This was the inspiration behind English Heritage’s decision to repaint the bridge in that colour (along with some old paint fragments they took from the bridge while they were conserving it.)

When I was commissioned to write the piece, I was told it would be used in a December issue, so there needed to be a strong sense of Christmas running throughout the piece. Thankfully, when I visited in October, the local authority had been round putting up the Christmas lights. I’m not one for getting into the festive spirit early, but on this occasion I was quite pleased that my photos looked Christmassy!

The riverside path offers a fantastic view of the Iron Bridge’s structure and the five iron spans that support the structure. As I mention in the article, it’s this structure that inspired engineers to build the world’s first iron-framed building, the Flaxmill Maltings in Shrewsbury – which became the prototype and fore-runner to many of today’s skyscrapers. Just think about that when you’re standing underneath this majestic bridge.

It cost money to cross the bridge – and tolls applied to everyone (including Royalty), although the owners of the bridge allowed the ferrymen who lost their livelihoods to cross for free.

A lot of people are getting used to its ‘new’ reddy-brown paint. Before it was an iron-grey – which seems appropriate, but I think, when looked at against a blue sky, the red looks quite effective. (I think you can say it’s growing on me!)

Elsewhere around the Gorge are a series of fascinating museums, including the Museum of Iron. Within its grounds are the remains of the furnace where it is believed those iron girders were cast.

And if you explore the Museum of Iron itself, you’ll see a wealth of items created from this amazing material.

This, and much more, is featured in the article. Oh, and do buy a museum passport to the Ironbridge Gorge Museums. It’s the cheapest way to pay for the entry fees, and the passport then gives you free entry to all museums over the next 12 months. You can find out more about the annual passes here.