Last Wednesday evening I attended a public meeting organised by the Support Group of my local library, and I was delighted to see so many people there. Over 200 people forced themselves into the hall to hear what was said. And emotions ran high. Whilst this isn’t always a good thing, because it detracts from the actual consultation process, it was an indication of the support that exists in the town for the library. 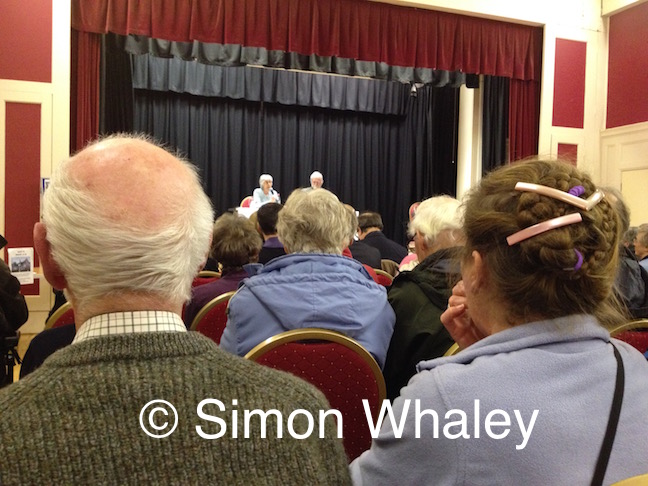 Like every other council in the UK, budget cuts mean tough decisions have to be made, and every service is being scrutinised, including the county’s library service. Every Shropshire community is having to consider how it can maintain a library service in the future. Shropshire Council has come up with an interesting proposal that would retain the library and even offer extended opening hours. From a Council perspective (of cutting annual revenue costs, whilst offering an improved service) the idea works brilliantly. The Academy Trust has offered to provide a building to house a brand new library (which will require funding to convert the building – but central government is making this capital cost money available if it enables councils to reduce their annual revenue costs in the long term), and Academy Trust staff will help to manage the library too.

However, the position of the new library is what angers the local population. The current library is not located right in the centre of town, but it’s well within the walkable (or motorised scooter) range of many residents when they come into town to do their business (banking, post office, food shopping, Thursday market, etc). Relocating the library to the school takes it further away from the town centre and well away from these facilities. The school is situated closer to the edge of town and is surrounded by residential roads, which means that people only go there if they live there, have friends they want to visit there, or have a specific reason to go to the school (which does include the leisure centre). The new library would be accessible to the school children too, and I have to say that, as an author, anything that puts more books in front of more children has to be a good thing for those children.

But it was clear from the public meeting on Wednesday night that many of the town’s residents, who are the primary users of the library in its current location, would find it difficult getting to the library in its new location … because they have no other reason to go to that part of town.

You can throw around many statistics here (and on the night of the meeting many were!), but I do think it should be recognised that the town has one of the highest densities of retired people in the county. Accessibility and mobility are therefore important issues for these people. The Headteacher at the Academy Trust has tried offering potential solutions to these difficulties, but so far his solutions have not persuaded the local community yet.

It’s not clear from the consultation whether the town has many other options available that have been developed as much as this Academy Trust transfer option. Clearly, the option of ‘Do Nothing’ just isn’t an option, because the Council is not in a financial position to ‘Do Nothing’. Something HAS to be done. The consultation mentions that if something isn’t done then library opening hours will have to be cut further, down from the current 32.5 hours over 4 days to 18.5 hours over 2.5 days. But library space would also be reduced and part of the building would have to be rented out to another organisation – although it’s not clear if there is another organisation that wants to use this space, so there are still many unanswered questions over this option. The suggestion that did receive a round of applause from the audience on Wednesday night was to keep the library where it is and suffer the reduced opening hours. Not great, but I think that shows how strong the local community feel about the current location of the library.

Yes, there are other issues, such as safeguarding children, but these are not insurmountable. Libraries have been located on school premises in other parts of the country. They’ve found solutions to this problem. Indeed, my mother attended a school in the late 1950s/early 1960s that also housed the public library (which might make people question how ground-breaking this idea is). But I don’t think the library being housed on school premises is a major issue; the issue is where the library is in town. If the school was located in the centre of town, the residents might be jumping for joy at the potential longer opening hours. But unfortunately, the school isn’t in the centre of town.

In my past experience of working for a local authority and assisting at public consultations, the one thing I learned was that communities ARE capable of taking difficult decisions … as long as the decision is the right one for THEM. So whilst the Council’s suggestion of transferring the library to the local Academy Trust is innovative and forward thinking (perhaps), but definitely the sort of solution central government is encouraging local authorities to consider (and we need to remember that central government is forcing a lot of change on local authorities and encouraging them to come up with different solutions to the way services are provided) … at the end of the day this solution is not the right one for the existing library users of the town.

It may seem strange to the local authority that the town appears to be turning its back on a bigger library, a more modern library, and potentially one with opening hours of six days a week. (Wow!) But I hope the council now understands that for this community what’s more important is WHERE the library is and therefore how accessible it is to the people who use it. Relocate the library to the school and it seems that fewer local residents will use the facility. What future then for a library that is used even less?

As an author whose books can be found on the shelves of my local library, I would much rather see the library open for fewer hours, but packed and used, than a shiny new library further away that people don’t want to use.