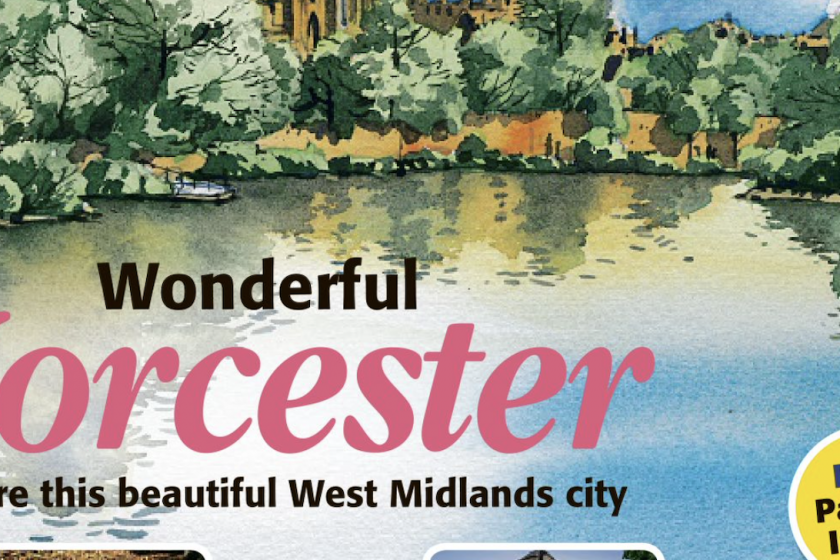 The latest issue of The People’s Friend magazine has my travel feature about Worcester.

The day I visited Worcester it was a bit wet. Or rather, it had been pouring with rain for many weeks, although the weather on this day was bright and sunny. But those numerous weeks of rain meant only one thing: a swollen River Severn and a flooded riverside. Indeed, at Worcester, when the River Severn reaches a certain height it’s not possible to cross the main bridge.

Worcester is well-known for it’s swans. A large section of the river beside the City is a Swan Sanctuary, where fishing is prohibited to give the swans a safe place to live. It does mean that when the river floods, their swimming area includes part of the city normally reserved for pedestrians!

You can’t visit Worcester without appreciating their love of their most famous son, Edward Elgar. There’s a fine statue to him near the city centre, opposite the cathedral.

There’s even a stained glass window to him in the Cathedral, although as my tour guide explained, it’s a bit of a Marmite window – visitors seem to either love it or hate it. But while you’re in the cathedral (and you should visit – it’s amazing) check out the tomb to King John. He wasn’t one of our best royals (he had a bit of a mean streak) but he’s buried in the tomb inside Worcester Cathedral.

Originally, he was buried under the ground, but when Prince Arthur was buried (nearby) in a tomb inside the Cathedral, but above the ground, it was felt inappropriate that a King should be buried underground, but a Prince be buried in a tomb above the ground. So to make sure the King was not ‘out buried’ (if there is such a phrase) this fine tomb was created. King John was then exhumed before being reburied above the floor in this rather fine stone tomb.

Like all cathedrals, no visit should be undertaken without looking up …

I’d opted for the tour of the Cathedral, and I can thoroughly recommend it. I paid £6 for an hour tour (which actually lasted nearly two, such was the enthusiasm of our retired guide whose knowledge of the building was incredible). The benefit of taking time to undertake such tours is that these guides point out so much more than you would otherwise notice.

As I explain in the article, it’s not until you really scrutinise the columns in the nave that you see they are decorated differently. It reveals not only the length of time that it took to construct the building, but is a visible reminder of the consequences of the plague: many stonemasons died, which meant their skills were not passed on.

Not far from the Cathedral is the museum for the Royal Worcester Porcelain Works.

The museum is relatively small, but houses a fascinating display of over 10,000 items, which begins with an introductory video narrated by Henry Sandon and his son, known from the BBC Antiques Roadshow programme.

Next to the Cathedral lies the Bishop’s Palace, home to Worcester Diocese’s administrative centre. Unlike my co-workers at the Diocese of Hereford, some of these staff appear to have a nice view of the river!

By now the view from Worcester Bridge, looking down stream was looking rather pretty in all this (unusual) sunshine.

About four miles away, at Lower Broadheath,is a wonderful, small cottage that is the birthplace of Edward Elgar. He only lived her for a couple of years, although the family often came back out here during the holidays.

Sadly, some misguided individuals had broken in recently, hence the rather ‘temporary-looking’ front door. All that had been taken were Elgar’s medals, but as the National Trust commented, these were irreplaceable. Clearly, that’s what thieves had targeted, probably posing as tourists in the days leading up to the burglary.

(Oh yes, and I can thoroughly recommend the National Trust tea rooms there, too!)

Ironically, at the bottom of the garden there was a witness. Although whether he saw anything, it’s difficult to say. For on this bench, you can see Elgar’s beloved Malvern Hills that inspired much of his music.

If you’d like to know more about what to see and do in Worcester, check out the following links: