Radical Steps. Such an unusual name, it seems, as I take the first step. It feels pretty solid underneath. Nothing radical there. It’s damp. Perspiring, even. As if it has been exercising, rather than those who’ve clambered up them. Leaf litter huddles against the rising face of the next step, but it’s mostly decayed stalks now: brown and black fibrous material.

Beside it, on a moss-drenched pillar, stands a narrow concrete post, marking the start, or the end depending upon which way you’re travelling, of the tubular metal handrail. It’s a classic local authority metal tubular handrail.

And on this post a small, green plastic rectangular plaque has been screwed – of which four of the six screws are relatively new, unblemished with rust. Such attention to its upkeep contradicts the sign’s own decay. It now says:

I chuckle. There are so many steps even the sign is exhausted and has lost count.

The stone wall the steps climb up against on my left looks tired and exhausted too. The cobwebs, saturated with morning dew, look like they’re holding the stones in place, like metal netting supporting motorway embankments.

Except it isn’t morning dew. The air is damp here most of the time, for behind me the bustling water of the River Lune hurtles by over curvaceous pebbles, on its journey to Lancaster and the Irish Sea.

Just like the Lune, the Radical Steps curve their way to their destination, pushing it out of sight, although if I stand on tiptoes I can just make out the top storey of the stone folly in St Mary’s churchyard above.

While the first step is broad and flat, the next few are steeper and uneven. Nearly two hundred years of wear and tear have eroded the precision with which these steps were first hewn. On some my toes point down towards the riser of the next. On others they climb, my heel nervous of slipping back over the edge.

My upward journey continues: slow and steady. The uneveness of the steps encourage me to lean into the stone wall, and grab the handrail. On the opposite side tall green foliage dominates: bracken, brambles and rosebay willow herb compete for the limited light. Overhanging branches from neighbouring trees cocoon this journey. Scrutinise Google Satellite view and the Radical Steps are nowhere to be seen. A secret path then. Bust still, hardly radical.

About half way up I pause for breath, close my eyes and instinctively grip the handrail tighter. Coldness shoots up my arm: the condensation conducting it with ease. A hint of woodsmoke infiltrates the subtle breeze. It’s not a cold day, but the dampness kills any warmth and amplifies the chill. I set another life goal: to learn the subtle differences of woodsmoke. To be able to name the fuel. Oak? Horse Chestnut? Scots Pine? I picture a roaring log fire in my mind, anyway.

“Excuse me.” A voice calls from behind.

Instinctively, my handrail hugging hand pulls me closer towards the wall. I open my eyes in time to see a pair of faded jeans and a red waterproof jacket power up the steps in front of me.

A twig with three half-dead leaves drops right before my eyes. Above my head sits a grey squirrel, hunched on a thicker branch, staring at me. He winks. Time to move on.

My hand pulls me upwards, as my feet struggle to cope with the choppy undulations of the steps. Seasickness? On the Cumbria / Lancashire border? The heights of the steps vary considerably. Was that a step? Or a ridge? When is a step a step? is that why the sign at the bottom avoids the issue? perhaps no one can agree?

Moments later, the hand rail ends abruptly. Gone is the awkwardness under my feet: replaced now with the smoothness of recently-laid asphalt. There’s a sense of space as the manicured lawns of St Mary’s churchyard occupies my left, with its antique headstones splattered with pure-air loving lichens.

But my eyes are pulled right, along the tarmac path, and soon my feet are following. One step. Two steps. Three.

And there it is. Ruskin’s View. The scene he called the finest in the land, if not the world. I can see what he was getting at. There’s a pleasingly balance between the River Lune, the farmland, the woodland and the distance hills of the Yorkshire Dales National Park. But that’s another slow journey; a saunter through Ruskin’s View. Is it the finest view in the land? Or is his statement a radical step too far? 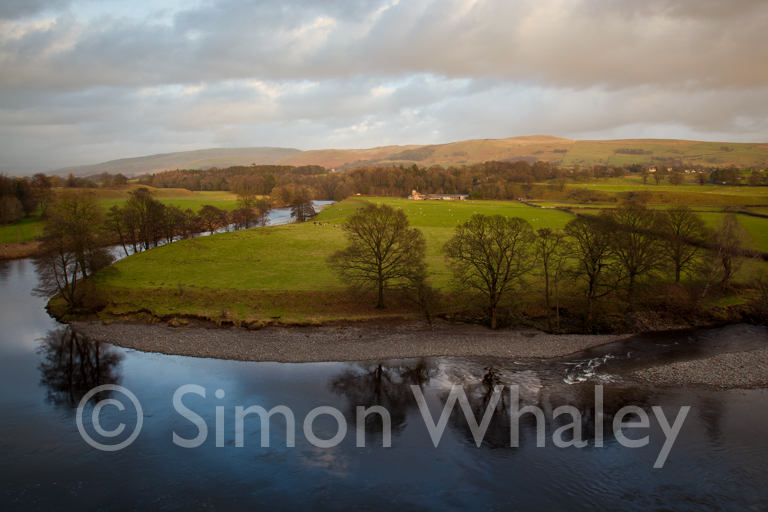