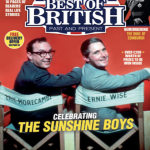 The May 2021 issue of Best of British has my piece about Robert Owen. Now, for those of you who don’t know, Robert Owen is acknowledged as the Father of the Co-operative movement. May 2021 marks the 250th anniversary of his birth, in the Welsh Border town of Newtown.

As Owen grew up, he read widely and learned, and discovered how to manage people in a way that made them more effective at their jobs. When he worked in the mills of Manchester, overseeing the workers, he soon spotted that the workers who had good living accommodation, good food and good health were also his most productive workers.

He went on to manage the mills at New Lanark, and it’s here that he introduced his vision, creating better housing for the workers, sending all children to nursery as soon as they could walk (so their mothers could get back to work) and offering evening classes for those who wanted to learn.

Other mills operated a system whereby workers were paid in tokens, which could be used to buy food and provisions from the mill shop (also run and managed by the mill owner). Typically in these mill shops, prices were over-inflated and product quality was poor.

Owen devised a system of buying items in bulk to get it as cheap as possible, and then he sold it to his workers with only a small margin of profit. Effectively, he was passing on to his workers most of the savings he gained by buying in bulk. And thus began the foundations of the modern Co-operative Movement, and the Co-op retail shops we know today.

There’s a fascinating museum at Newtown which explores Robert Owen’s life and his impact upon society, which is well worth a visit if you’re ever in the town.

And Newtown also has another claim to fame: It’s where Sir Pryce Pryce-Jones established his retail business, next to the railway station, which relied upon customers posting their orders and payments to him, and he would despatch their goods to them by post. Yes – the mail order business model was created in Newtown, on the Welsh Borders. (He’s also credited as being the inventor of the sleeping bag!)