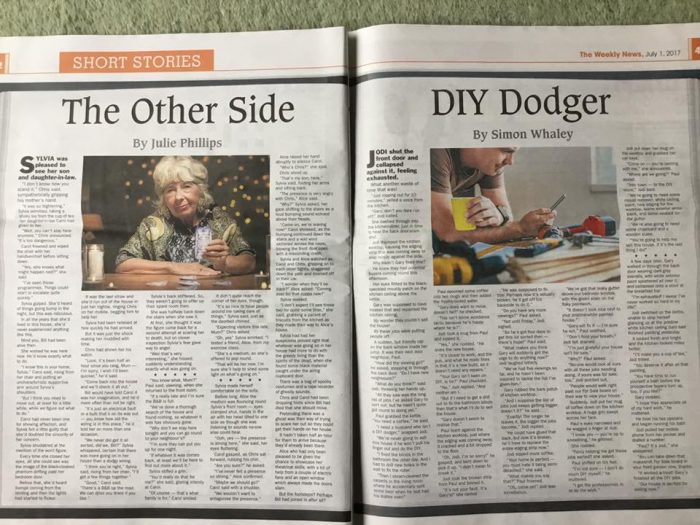 The latest issue of The Weekly News has a story in it I’ve written called DIY Dodger (well, they say ‘write about what you know’). And I’m delighted to see that I share the fiction slot with Julie Phillips. Julie and I both go to the Wrekin Writers group, and we’ve been wondering whether it would be possible for the both of us to be ‘issue buddies’. So whenever we’ve both had a story to submit to The Weekly News, we’ve submitted them at the same time. And it worked! (It took a few attempts, and although we submitted them at the same time, we did so independently.) Here we are as issue buddies.

So this week’s fiction in The Weekly News is provided by Wrekin Writers! 😉

Jodi shut the front door and collapsed against it, feeling exhausted.

What another waste of time that was!

“Just nipping out for 10 minutes,” yelled a voice from the kitchen.

She dashed through into the kitchen-diner, just in time to hear the back door slam shut.

Jodi thumped the kitchen worktop, causing the edging strip that was coming away to slap noisily against the side.

Why hadn’t Gary fixed this?

He knew they had potential buyers coming round this afternoon.

Her eyes flitted to the black-speckled mouldy patch on the kitchen ceiling above the kettle.

Gary was supposed to have treated that and repainted the kitchen ceiling.

No wonder they couldn’t sell the house!

All these jobs were putting people off.

A sudden, but friendly rap on the back window made her jump. It was their next door neighbour, Paul.

“How did the viewing go?” he asked, stepping in through the back door. “Do I have new neighbours?”

“What do you think?” said Jodi, throwing her hands up.

“All they saw was the long list of jobs I’ve asked Gary to sort out, but he hasn’t quite got round to doing yet.”

Paul grabbed the kettle. “You need a strong coffee.”

“I need a husband who isn’t a DIY dodger,” snapped Jodi.

“We’re never going to sell this house if he won’t pull his finger out and do the DIY. I fixed the blinds in the bathroom the other day. And I had to drill new holes in the wall to fix the roller. Then I steam-cleaned the carpets in the living room where he accidentally spilt some beer when he last had his mates over.”

Paul spooned some coffee into two mugs and then added the freshly-boiled water. “Gary does want to move, doesn’t he?” he checked. ‘This isn’t some avoidance tactic because he’s happy where he is?”

Jodi took a mug from Paul and sipped it. “Yes,” she nodded. “He loves the new house. It’s closer to work, and the pub, and what he really likes is that it’s a new build, so it doesn’t need any DIY doing to it.”

“Your Gary isn’t keen on DIY, is he?” Paul chuckled.

“No,” Jodi replied. “And neither am I. But if I need to get a drill out to fix the bathroom blinds then that’s what I’ll do to sell the house. Gary doesn’t seem to realise that.”

Paul leant against the kitchen worktop, just where the edging was coming away. It cracked and a bit dropped to the floor.

Jodi took the broken strip from Paul and binned it.

“It’s not your fault. It’s Gary’s!” she ranted. “He was supposed to fix this. Perhaps now it’s actually broken he’ll get off his backside to do it.”

“Do you have any more viewings?” Paul asked.

“Not until Friday,” Jodi sighed.

“So he’s got four days to get this lot sorted then – there’s hope!” Paul said.

“What makes you think Gary will suddenly get the urge to do anything now?” Jodi laughed bitterly. “We’ve had five viewings so far and he hasn’t been inspired to tackle the list I’ve given him.”

Paul rubbed the bare patch of kitchen worktop. “And I suppose the list of jobs just keeps getting bigger, doesn’t it?” he said.

“Exactly! The longer he leaves it, the bigger the jobs become,” Jodi replied. “He could have glued that back, but now it’s broken he’ll have to replace the entire edging strip now.”

Jodi sipped more coffee. “Your home is perfect – you must hate it being semi-detached,” she said.

“What makes you say that?” Paul frowned.

“Oh, come on!” Jodi was incredulous. “We’ve got that leaky gutter above our bedroom window, with the green stain on the flaky paintwork. It doesn’t look nice next to your pristine-white painted house.”

“No one would look at ours with all these jobs needing doing, if yours was for sale too.”Jodi pointed out. “People would walk right past our For Sale board on their way to view your house.”

Suddenly, Jodi put her mug of coffee down on the kitchen worktop. A huge grin swept across her face.

Paul’s eyes narrowed and he wagged a finger at Jodi. “I know you – you’re up to something,” he grinned.

She nodded. “Fancy helping me get these jobs sorted?” she asked.

Paul shifted on his feet. “I’m not sure – I don’t do much DIY myself,” he muttered. “I get the professionals in to do the work.”

Jodi put down her mug on the worktop and grabbed her car keys. “Come on – you’re coming with me,” she announced.

“Where are we going?” Paul asked.

“Into town – to the DIY store.” Jodi said. “We’re going to need some mould remover, white ceiling paint, new edging for the worktop, some exterior white paint, and some sealant for the gutter. We’re also going to need some chipboard and a wooden stake. You’re going to help me sell this house, if it’s the last thing I do!”

A few days later, Gary walked in through the back door wearing dark-grey overalls, with white exterior paint splattered all over it, and collapsed onto a stool at the breakfast bar.

“I’m exhausted! I’ve never worked so hard in my life!”

Jodi switched on the kettle, unable to stop herself glancing up at the pristine-white kitchen ceiling Gary had finished painting yesterday. It looked fresh and bright and the kitchen looked miles better.

“I’ll make you a cup of tea,” Jodi trilled. “You deserve it after all that painting. You have time to run yourself a bath before the prospective buyers turn up, too, if you like.”

Gary nodded. “I hope they appreciate all of my hard work,” he muttered.

He took his tea upstairs and began running his bath.

Jodi pulled her mobile phone from her pocket and dialled a number.

“Paul? It’s Jodi,” she whispered. “You can take down that makeshift For Sale board in your front garden now, thanks. It worked a treat! Gary’s finished all the DIY jobs. Our house is perfect for selling now.”