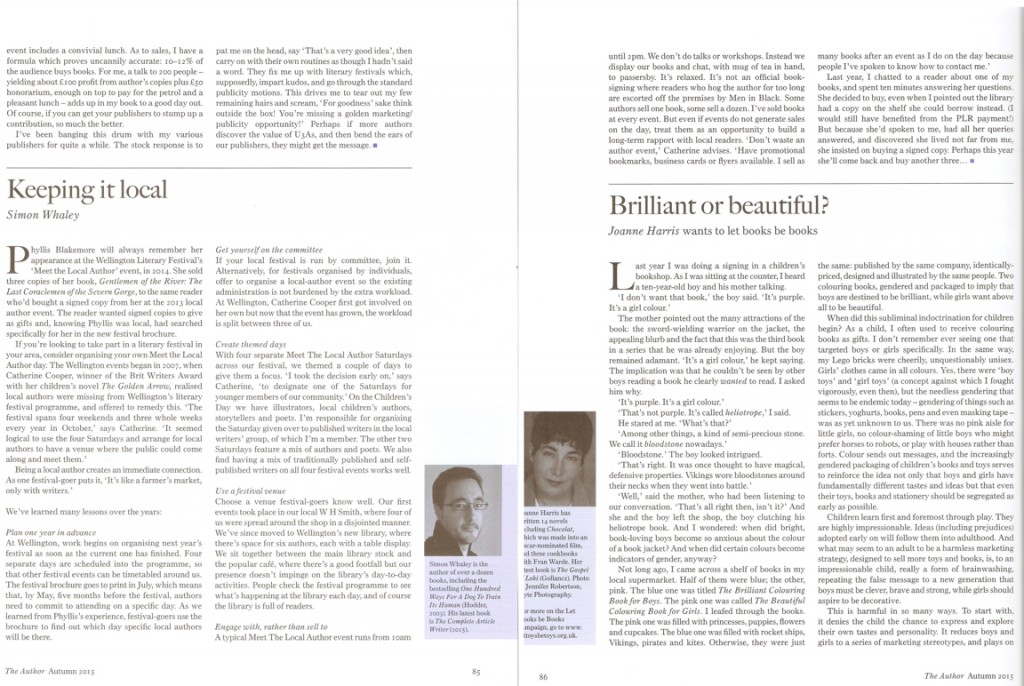 Keeping It Local was published in the Autumn 2015 issue of The Author, the Journal of the Society of Authors

Phyllis Blakemore will always remember her appearance at the Wellington Literary Festival’s ‘Meet the Local Author’ event, in 2014. She sold three copies of her book, Gentlemen of the River: The Last Coraclemen of the Severn Gorge, to the same reader who’d bought a signed copy from her at the 2013 local author event. The reader wanted signed copies to give as gifts and, knowing Phyllis was local, had searched specifically for her in the new festival brochure.

If you’re looking to take part in literary festivals in your area, consider organising your own Meet the Local Author day. The Wellington events began in 2007, when Catherine Cooper, winner of the Brit Writers Award with her children’s novel The Golden Arrow, realised local authors were missing from Wellington’s literary festival programme,  and offered to remedy this. ‘The festival spans four weekends and three whole weeks every year in October,’ says Catherine. ‘It seemed logical to use the four Saturdays and arrange for local authors to have a venue where the public could come along and meet them.’

Being a local author creates an immediate connection. As one festival-goer puts it, ‘It’s like a farmer’s market, only with writers.’

We’ve learned many lessons over the years:

Plan one year in advance

At Wellington, work begins on organising next year’s festival as soon as the current festival has finished. Four separate days are scheduled into the programme, so that other festival events can be timetabled around us. The festival brochure goes to print in July, which means that, by May, five months before the festival, authors need to commit to attending on a specific day. As we learned from Phyllis’s experience, festival-goers use the brochure to find out which day specific local authors will be at the library.

Get yourself on the committee

If your local festival is run by committee, join it. Alternatively, for festivals organised by individuals, offer to organise a local author event so the existing administration is not burdened by the extra workload. At Wellington, Catherine Cooper first got involved on her own, but now the event has grown, the workload is split between three of us.

With four separate Meet The Local Author Saturdays across our festival, we themed a couple of days to give them a focus. ‘I took the decision early on,’ says Catherine, ‘to designate one of the Saturdays for younger members of our community.’ On the Children’s Day we have illustrators, local children’s authors, storytellers and poets. I’m responsible for organising the Saturday given over to published writers in the local writers’ group, of which I’m a member. The other two Saturdays feature a mix of authors and poets. We also find having a mix of traditionally published and self-published writers on all four festival events works well.

Use a festival venue

Choose a venue festival-goers know well. Our first events took place in our local W. H. Smiths where four of us were spread around the shop in a disjointed manner. We’ve since moved to Wellington’s new library, where there’s space for six authors, each with a table display. We sit together between the main library stock and the popular café, where there’s a good footfall, but our presence doesn’t impinge on the library’s day-to-day activities. People check the festival programme to see what’s happening at the library each day, and of course the library is full of readers.

Engage with, rather than sell to

A typical Meet The Local Author event runs from 10am until 2pm. We don’t do talks or workshops. Instead we display our books and chat, with mug of tea in hand, to passersby. It’s relaxed. It’s not an official book-signing where readers who hog the author for too long are escorted off the premises by Men in Black. Some authors sell one book, some sell a dozen. I’ve sold books at every event. But even if events do not generate sales on the day, treat them as an opportunity to build a long-term rapport with local readers. ‘Don’t waste an author event,’ Catherine advises. ‘Have promotional bookmarks, business cards or flyers available. I sell as many books after an event as I do on the day because people I’ve spoken to know how to contact me.’

Last year, I chatted to a reader about one of my books, and spent ten minutes answering her questions. She decided to buy, even when I pointed out the library had a copy on the shelf she could borrow instead. (I would still have benefited from the PLR payment!) But because she’d spoken me, had all her queries answered, and discovered she lived not far from me, she insisted on buying a signed copy. Perhaps this year she’ll come back and buy another three …