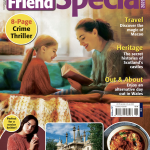 Issue 185 of The People’s Friend Special has just hit the newsstands, and it contains my feature on the Centre for Alternative Technology, near Machynlleth, Wales.

It really is one of those places that you have to visit for yourself, to get a greater understanding of what they do there. I was fortunate to visit back in June, when they were open to prospective post-graduates, who were looking to expanding their knowledge of sustainable building. Many of the potential post-graduates already had a degree in architecture, and were looking to augment their knowledge with gaining a greater understanding of how to make our buildings more sustainable for the future.

Since its inception in the early 1970s, the site has always been an area of experimentation. As a former slate mine, it wasn’t connected to the national grid network (electricity and water), so the site has to be completely self-sufficient. Which means they’ve had to experiment, as they’ve tried to live off the land and generate the power they need.

As a result, there are many displays that they’ve created over time, to explain how alternative technology, like wind and solar power works, as well as how to make buildings that are sustainable, without damaging the earth.

There’s a fascinating house built in the late 1970s that had really thick walls, small windows that were triple glazed, and great insulation. As a result, the whole house (of three bedrooms) only needed one radiator to heat it.

Anyway, I’m rushing ahead of myself! Arriving at CAT involves using the water-balanced funicular railway – one of the steepest in the world, operating at an angle of 35 degrees.

For years, I remember driving past CAT and seeing one of the world’s first wind-powered turbines stuck on a hillside, it’s blades fixed, and hardly moving. At the time of its installation, we didn’t understand wind power. Thanks to CAT’s experiment, we do now … and we’ve learned that wind turbines are not as effective stuck on the side of hills (they work much better when put on TOP of hills, and even BETTER when installed out at sea). This particular turbine failed to work properly because of where it was sited. The wind whistle around hills, and constantly changes direction as it copes with the changing landscape. That’s no good for wind turbines. They’re more efficient when they face into a good, constant breeze, such as those found on top of mountain ranges, or out at sea.

Drive around Machynlleth, and you’ll see wind turbines about. One’s even been adopted by the town, and they now generate their own electricity.

Over the last 40 years they’ve experimented a lot. They’ve learned about building houses out of straw.

It can be done, but as the photo above shows, if you don’t put a thick enough exterior cladding on it, it can deteriorate.

CAT’s sustainability ethos also looks at how we manage land, and grow food. There are several ‘gardens’ to explore, as well as a huge polytunnel. They must be doing something right – just look at the size of the slugs!

If you get the chance, take the Quarry Trail, which explores the wider site, taking you up to the quarry pool, where they get their water from. There’s a small building/hut, built entirely from local resources. It was part of George Clarke’s Amazing Spaces television series for Channel 4 – it was built within 24 hours (in the rain – well, it’s Wales, what did they expect?). Check it our here:

If ever you get the chance to visit – do. You can wander around the site at your own pace (there’s even an adventure playground for the kids), take refreshments in one of the world’s longest established vegetarian cafes, or you can opt for a free, guided tour (really informative). They even allow dogs on leads to some areas of the site.

There’s so much that makes sense here, you wonder why modern housebuilders are not incorporating the sustainability into today’s houses. It’s a thought-provoking place, but also one that’s hopeful and upbeat, because it shows what can be done!

For more information about visiting times and how to get there, visit their website.

(Oh yeah, and watch out for the giant mole!)