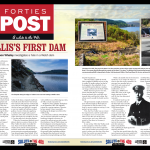 October marks the 40th anniversary of the death of one of this country’s most famous engineers: Barnes Wallis.

To commemorate this, I’ve written a piece for the October issue of Best of British magazine looking at one of Wallis’s lesser known escapades in the Welsh Elan Valley.

Best known for the bouncing bomb, that didn’t come about until he’d worked out where exactly a bomb needed to detonate in order to destroy a dam. And that’s where the Elan Valley comes in.

The Nant y Gro dam, built to create a small reservoir of water for the army of engineers who built the massive dams in the Elan Valley, became the test dam that Wallis was permitted to destroy.

And it took him a couple of attempts.

There’s a fascinating information panel nearby, but unless you know where you’re heading, it’s not well signposted.

My advice is to park in the car park at the main Elan Valley Visitor Centre at the foot of the Caban Coch Dam. Walk around the right of the visitor centre, and then cross the River Elan taking the path around the pump houses, near the foot of the dam. A steep path then climbs up to the top of the dam.

Near the top is a flat section overlooking the vast Caban Coch Reservoir, and a good path visible, running alongside the water’s edge.

Follow this, as it climbs above the reservoir, gently bearing left, as it follows the contours of the hill, into a side valley. This is where you’ll find the ruins of Nant y Gro dam, standing just as Wallis left them … with a gaping great hole in the middle.

It’s quite humbling, standing here, knowing that this is the true start of the bouncing bomb story. Because if Barnes Wallis hadn’t worked out where the detonation needed to take place in order to destroy the dam, there would not have been a need for a bouncing bomb.