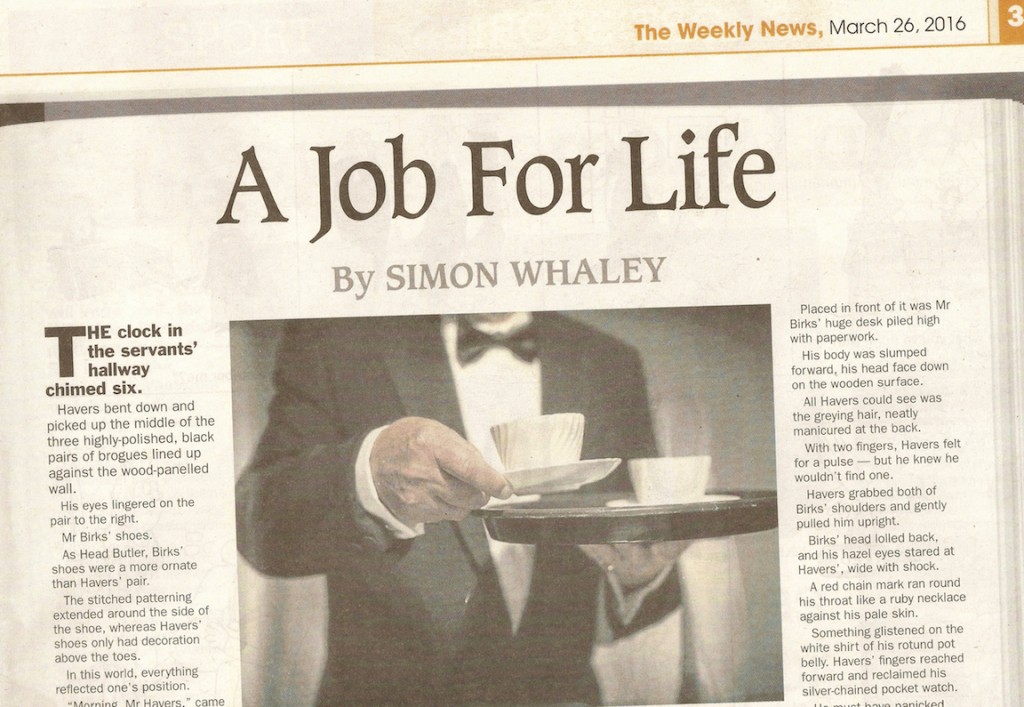 The clock in the servant’s hallway chimed six. Havers bent down and picked up the middle of the three highly-polished, black pair of brogues lined up against the wood panelled wall. His eyes lingered on the pair to the right. Mr Birks’ shoes. As Head Butler, Birks’ shoes were a more ornate than Havers’. The stitched-patterning extended around the side of the shoe, whereas Havers’ shoes only had decoration above the toes. In this world, everything reflected one’s position.

“Morning, Mr Havers. Not a problem with your shoes, is there? I worked hard on cleaning those, I did.”

The fresh-faced Master James looked up at Havers, from the wooden chair just outside Birks’ office. He was slipping on the plainest of the three pairs of brogues.

In the reflection of his highly-polished shoes, Havers’ spotted James scrutinising his face, in particular his strained eyes. He hadn’t had half the sleep he needed last night.

“No. You’ve done a good job here,” Havers replied, turning them over and examining the cleanliness of their soles.

“I have a good teacher.” Master James winked. “But I won’t be the Trainee Butler forever, will I? When you become Head Butler, I’ll be promoted to your position. How old were you when you became Under Butler?”

Master James’ enthusiasm reminded him of his dreams and wishes when he were his age. “Thirty two,” Havers replied. With the desire to be Head Butler by forty.

Master James rose from the chair and beckoned Havers to take the seat. “So, how old do you think you’ll be when you become Head Butler?”

Havers smiled, but hid his reaction as he bent down and took the seat. James was a clever kid. Asking about Havers’ career was James’ way of finding out about his own career path.

Havers loosened the shoelaces, pulling at the tongue of the right shoe, preparing to slip it on. Fifty seemed such a long way off when in your early twenties. He didn’t think he’d be an Under Butler for the eighteen years he had.

“Fifty five?” Havers suggested, tying the knot of his laces, as if hinting that reaching the pinnacle of a butler’s career had never crossed his mind at that age.

But Master James knew he was lying. Promotion was all any Trainee Butler thought about, as Havers well knew.

“So you reckon Birks will be around for at least another five years, then?” Master James crossed his arms and pouted as he considered Havers’ response.

Havers prepared his left shoe to accept his foot.

Havers knew James was contemplating his answer and its implications upon him. If Havers didn’t move on for five years, then neither would James. His career progression was dependant upon Havers’. The Head Butler’s brogues are not called Dead Man’s Shoes for nothing.

“Mr Birks doesn’t appear to be up yet.” Master James frowned. He glanced down the corridor to the kitchen where Mrs Twynham was planning the day’s meals for the family upstairs. Then he looked the other way, towards the servant’s staircase, in case Mr Birks was about to come silently padding downstairs in his socks.

The ritual of putting on one’s shoes outside Mr Birks’ office had been his predecessor’s idea. Socks maketh the man silent as he wanders about the house in the early hours of the morning and the late hours at night. Less chance of disturbing the family as staff busied themselves while they slept. It also meant Mr Birks could creep up on his staff when they least suspected it. Havers’ had been caught reading his Lordship’s Times on several occasions when he was supposed to be ironing it, and he’d suffered the consequences. Although, such hierarchy meant that Havers’ could chastise Master James for any misdemeanours. Master James’s tendency to nip out by the washroom door for a quick puff of tobacco needs to be nipped in the bud. Havers had taken off his shoes and caught him mid-drag many a time.

“Perhaps Mr Birks is already in his office?” Master James turned to grab the door handle.

“No!” Havers hissed, securing his hand. “Remember seniority. It is I who knocks and enters. You only do so if you’ve been summoned. Have you been summoned?”

Master James shook his head. “But Mr Birks is never late. The clock has chimed and he’s not wearing his shoes. Perhaps he’s ill.”

How long since the clock chimed six? Havers’ fingers slipped into his waist coat pocket.

“Are you all right?” Master James enquired. “You’ve gone quite pale.”

His fingers ferreted around an empty pocket. His pocket watch, with its long silver chain, was not there. He remembered. Last night. He’d lost it. That’s what had kept him awake half the night.

“Run along to Mrs Twynham. See if she needs more coal for the ovens.”

Alone in the corridor, Havers’ fingers gently wrapped themselves around the cold brass handle of Mr Birks’ office door. He twisted. The catch clicked and the door gently swung open.

The Head Butler’s office is one of the few basement rooms with a window. Placed in front of it was Mr Birks’ huge desk piled high with paperwork. Except he wasn’t doing any paperwork. His body was slumped forward, his head face down on the wooden surface. All Havers could see was the greying hair, neatly manicured on the back of his head.

Tentatively, he stepped forward, tiptoeing quietly in his shoes. He stretched out his hand, which quivered as it journeyed to Birks’ neck. With two fingers Havers felt for a pulse. But he knew he wouldn’t find one. His skin was too cold.

Havers grabbed both of Birks’ shoulders and gently pulled him upright, back into his seat. Birks’ head lolled backwards, suddenly, and his hazel eyes stared at Havers’, wide with shock. Death had not been expected. A red chain mark ran round his throat like a ruby necklace against his pale skin. Something glistened on the white shirt of his rotund pot belly. Havers’ fingers reached forward and reclaimed his silver-chained pocket watch.

He must have panicked and dropped it last night. As soon as the deed was done, he’d hurtled back up to his attic bedroom. Only then did he realise his watch was missing.

Suddenly, there was a cough behind him. Havers spun round.

“You’ll be needing these.”

Havers clutched his watch to his chest in shock. Master James stood inside the door, holding Mr Birks’ Head Butler shoes. Havers looked at the floor and saw Master James wiggle his black-socked feet. He was no longer wearing his Trainee Butler brogues.

“How long have you been standing there?” Havers questioned.

“Long enough to know that you’re now wearing my shoes.”

Havers glanced down at his feet, and his Under Butler shoes, and then looked James in the eye.

“Congratulations,” Master James said. “Head Butler five years earlier than you thought. A job for life. Although, I’m not sure I’ll be able to wait until I’m fifty.”

Havers stared at the shoes Master James was holding out for him. The Head Butler’s shoes. Dead man’s shoes. For men who wouldn’t be around much longer. He gulped.