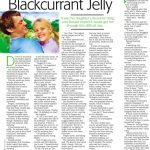 Donald drummed his fingers against the steering wheel of his Ford Focus, his eyes fixed on the school entrance.

Any minute now, those doors would fly open and hundreds of happy kids would stream out, overjoyed at their freedom. Then he would see his Suzie emerge, alone and despondent from the challenges she’d had to cope with today.

His stomach cramped as if someone had pushed their hand inside him, wrapped their fingers around his intestines and then squeezed.

Fingers. Everything was about fingers. Ever since that day three months ago.

He crossed his arms, trapping his fingers. His stomach cramped again. Donald fought the wince, but failed. It was nothing, though. Nothing to what Suzie had endured. Was enduring.

It had started with a sniffle. An ordinary sniffle. Colds are part of the school curriculum, like Maths, English and semolina pudding. Donald smiled. Surprisingly, that had been Suzie’s worst fear when he’d dropped her off this morning.

‘What if it’s semolina pudding? I hate that.’

In the rear view mirror, he watched her nose turn up at the thought. ‘Imagine it’s your favourite instead,’ he suggested.

‘Close your eyes.’ He said, then watched Suzie’s reflection in the mirror. ‘Now imagine the biggest spoonful of blackcurrant jelly in your mouth.’

Suzie giggled, her eyes scrunched shut, causing them to disappear under her blonde fringe.

‘Now swallow it,’ he suggested.

‘That was lovely. Thanks, Dad. I’ll definitely do that.’

He laughed. ‘It’s all in the mind, you see.’ He tapped the side of his forehead. ‘Our brains are amazing. If there’s something you can’t do, or don’t want to do, let your imagination take over. You can do anything then.’

‘Not if it gets you into trouble with Mrs Hopkins, you’re not.’ Donald arched his eyebrows, then grinned. ‘Go on. Off you go. Can you manage?’

Sarah unclipped her seatbelt. “Yes, Dad,’ she sighed, as she jumped out of the car. ‘Bye, Dad.’

The door slammed and the car wobbled with the force. Sometimes the strength of his seven-year-old daughter astounded him. She didn’t turn back as she ran into the school playground. Within seconds her friends were gathering round. Yet all he could see were the five stumps on each hand where her fingers and thumbs should have been.

His stomach churned again as he remembered Helen rolling the glass beaker against the rash on Suzie’s arm. Their horror was reflected in each others’ eyes. Helen dialled 999, but Donald had scooped up his daughter in his arms and hurried out to the car. If only they’d acted sooner. That first sniffle.

The doctors said they shouldn’t blame themselves. Another hour would have made no difference. But Donald’s stomach thought otherwise, torturing him as they’d watched over Suzie, lying in the hospital bed, with wires and tubes coming out of her, and the tips of her fingers and thumbs slowly blackening.

He didn’t remember hugging Helen when the doctor explained the need to amputate. But he’d hugged her so tightly his fingermarks were still visible on her skin three days later. Finger marks. Something Suzie could never leave now.

The operation had gone well.The doctors had saved Suzie’s hands. Only her fingers and thumbs had to be sacrificed.

Three months’ recovery had arrived at today – her first day back at school.

He knew she’d been dreading it. They all had. But it was also the first day of normality. A new normality, whatever that was.

A cheer of screaming children erupted from the school’s double doors, as they escaped into the playground’s freedom. Donald’s stomach rolled its contents like a cement mixer, constantly churning its produce to stop it from settling. Then he spotted her. Her arms were draped around the necks of her two best friends. His eyes fixed on the stumps resting on their shoulders.

She saw him and waved. Her limb rocked from side to side like a windscreen wiper on its highest, most frantic setting . No more delicate finger waves.

Donald flapped his fingers at her, then immediately regretted it. He still felt awkward at times. All fingers and thumbs.

Suzie hurried up to the rear passenger door and grappled with the door handle. Twice it slipped from her stump-grasp. Donald stretched to open the door from the inside.

‘I can do it!’ Suzie stared at him defiantly. Helen did the same whenever he overstepped the mark.

The door clicked open and he sensed Suzie’s relief as she jumped onto the back seat.

‘How was your day, darling?’ For the first time since arriving, Donald’s stomach froze.

‘Brilliant! We had semolina pudding, so I imagined blackcurrant jelly. And it worked. The dinner lady said she’d never known me to eat all of it before.’

Donald grinned. ‘See? I told you. Imagination can turn the worst things into the best of things.’

Suzie nodded. ‘Mrs Hopkins said I did really good in maths today. I was the only one to get seven times seven right.’

‘Well done.’ Donald relaxed. Her excitement put him at ease. He’d imagined the worse, but it hadn’t happened.

‘It was so easy,’ Suzie continued, as she struggled to secure her seatbelt. ‘I used my imagination, like you told me to.’

A satisfying click resonated around the car interior. Donald released a breath of relief. Such a simple, ordinary sound now meant so much. Growing independence.

‘I used my fingers and thumbs.’

‘I thought that if I could imagine semolina pudding into blackcurrant jelly, then all I had to do was imagine lots and lots of fingers and thumbs on my hands. It was easy! I had fifty. Twenty five on each hand. I had one left over, of course, so I threw it away.’ Suzie beamed. ‘Everyone else on my table had to borrow someone else’s fingers to keep track. I didn’t. I did it on my own.’

The anguish in Donald’s stomach dissipated. It hadn’t occurred to him that Suzie would find advantage in her new situation. All he’d imagined was the worst. If Suzie could be positive, then he could try focusing on the positives, too.

For the first time in weeks Donald felt hungry. He turned the ignition. ‘Come on. Let’s go home. What do you want for tea?’

‘Blackcurrant jelly it is.’

Donald pulled out onto the road, sensing butterflies in his stomach. Not nervous butterflies, but butterflies of excitement. Suzie was going to be okay. He could see that now. All it took was a little imagination.

And some blackcurrant jelly.