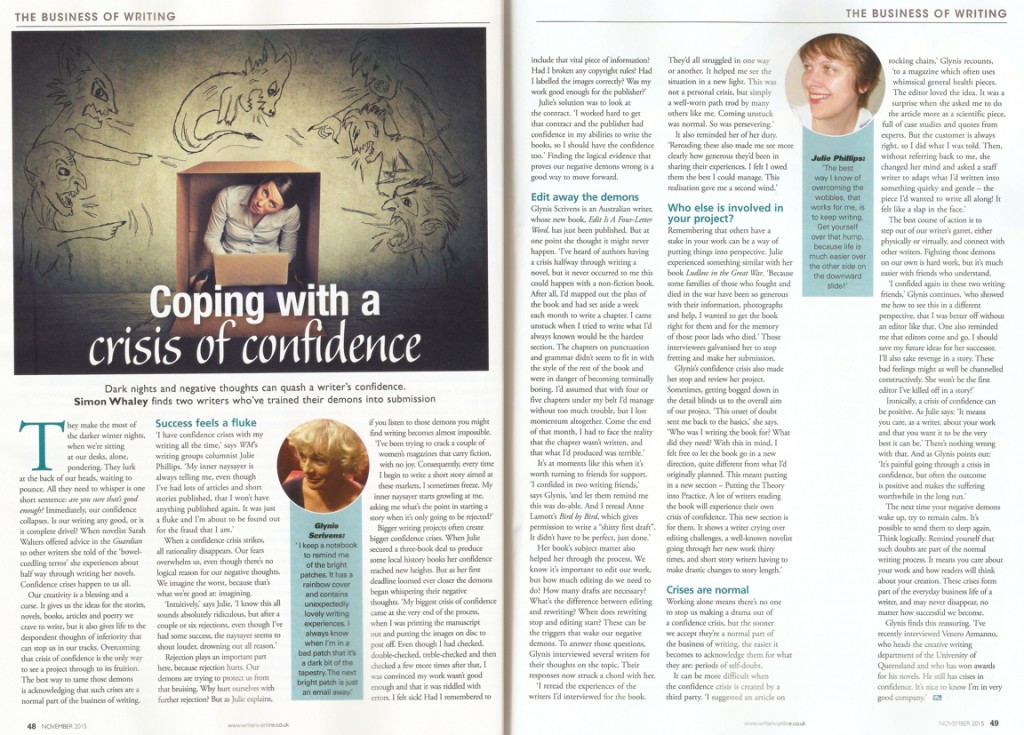 They make the most of the darker winter nights, when we’re sat at our desks, alone, pondering. They lurk at the back of our heads, waiting to pounce. All they need to whisper is one short sentence: are you sure that’s good enough? Immediately, our confidence collapses. Is our writing any good, or is it complete drivel? When novelist Sarah Walters offered advice in The Guardian to other writers she told of the ‘bowel-curdling terror’ she experiences about half way through writing her novels. Confidence crises happen to us all.

Our creativity is a blessing and a curse. It gives us the ideas for the stories, novels, books, articles and poetry that we crave to write, but it also gives life to the despondent thoughts of inferiority that can stop us in our tracks. Overcoming that crisis of confidence is the only way to see a project through to its fruition. The best way to tame those demons is acknowledging that such crises are a normal part of the business of writing.

‘I have confidence crises with my writing all the time,’ says Writing Magazine columnist Julie Phillips. ‘My inner naysayer is always telling me, even though I’ve had lots of articles and short stories published, that I won’t have anything published again. It was just a fluke and I’m about to be found out for the fraud that I am.’

When a confidence crisis strikes, all rationality disappears. Our fears overwhelm us, even though there’s no logical reason for our negative thoughts. We imagine the worst, because that’s what we’re good at: imagining.

‘Intuitively,’ says Julie, ‘I know this all sounds absolutely ridiculous, but after a couple or six rejections, even though I’ve had some success, the naysayer seems to shout louder, drowning out all reason.’

Rejection plays an important part here, because rejection hurts. Our demons are trying to protect us from that bruising. Why hurt ourselves with further rejection? But as Julie explains, if you listen to those demons you might find writing becomes almost impossible. ‘I’ve been trying to crack a couple of women’s magazines that carry fiction, with no joy. Consequently, every time I begin to write a short story aimed at these markets, I sometimes freeze. My inner naysayer starts growling at me, asking me what’s the point in starting a story when it’s only going to be rejected?’

Bigger writing projects often create bigger confidence crises. When Julie secured a three-book deal with a publisher to produce some local history books her confidence found new heights. But as her first deadline loomed ever closer the demons began whispering their negative thoughts. ‘My biggest crisis of confidence came at the very end of the process, when I was printing the manuscript out and putting the images on disc to post off. Even though I had checked, double checked, treble checked and then checked a few more times after that, I was convinced my work wasn’t good enough and that it was riddled with errors. I felt sick! Had I remembered to include that vital piece of information? Had I broken any copyright rules? Had I labeled the images correctly? Was my work good enough for the publisher?’

Julie’s solution was to look at the contract. ‘I worked hard to get that contract and the publisher had confidence in my abilities to write the books, so I should have the confidence too.’ Finding the logical evidence that proves our negative demons wrong is a good way to move forward.

Edit Away The Demons

Glynis Scrivens is an Australian writer, whose new book, Edit Is A Four-Letter Word, has just been published. But at one point she thought it might never happen. ‘I’ve heard of authors having a crisis half way through writing a novel, but it never occurred to me this could happen with a non-fiction book. After all, I’d mapped out the plan of the book and had set aside a week each month to write a chapter. I came unstuck when I tried to write what I’d always known would be the hardest section. The chapters on punctuation and grammar didn’t seem to fit in with the style of the rest of the book and were in danger of becoming terminally boring. I’d assumed that with four or five chapters under my belt I’d manage without too much trouble, but I lost momentum altogether. Come the end of that month, I had to face the reality that the chapter wasn’t written, and that what I’d produced was terrible.’

It’s at moments like this when it’s worth turning to friends for support. ‘I confided in two writing friends,’ says Glynis, ‘and let them remind me this was do-able. And I reread Anne Lamott’s Bird by Bird, which gives permission to write a “shitty first draft”. It didn’t have to be perfect, just done.’

Her book’s subject matter also helped her through the process. We know its important to edit our work, but how much editing do we need to do? How many drafts are necessary? What’s the difference between editing and re-writing? When does re-writing stop and editing start? These can be the triggers that wake our negative demons. To answer those questions, Glynis interviewed several writers for their thoughts on the topic. Their responses now struck a chord with her.

‘I reread the experiences of the writers I’d interviewed for the book. They’d all struggled in one way or another. It helped me see the situation in a new light. This was not a personal crisis, but simply a well-worn path trod by many others like me. Coming unstuck was normal. So was persevering.’

It also reminded her of her duty. ‘Rereading these also made me see more clearly how generous they’d been in sharing their experiences. I felt I owed them the best I could manage. This realisation gave me a second wind.’

Remembering that others have a stake in your work can be a way of putting things into perspective. Julie experienced something similar with her book Ludlow in the Great War. ‘Because some families of those who fought and died in the war have been so generous with their information, photographs and help, I wanted to get the book right for them and for the memory of those poor lads who died.’ It was those interviewees who galvanised her to stop fretting and make her submission.

Glynis’s confidence crisis also made her stop and review her project. Sometimes, getting bogged down in the detail blinds us to the overall aim of our project. ‘This onset of doubt sent me back to the basics,’ she says. ‘Who was I writing the book for? What did they need? With this in mind, I felt free to let the book go in a new direction, quite different from what I’d originally planned. This meant putting in a new section – Putting the Theory into Practice. A lot of writers reading the book will experience their own crisis of confidence. This new section is for them. It shows a writer crying over editing challenges, a well-known novelist going through her new work thirty times, and short story writers having to make drastic changes to story length.’

Working alone means there’s no one to stop us making a drama out of a confidence crisis, but the sooner we accept they’re a normal part of the business of writing, the easier it becomes to acknowledge them for what they are: periods of self-doubt.

It can be more difficult when the confidence crisis is created by a third party. ‘I suggested an article on rocking chairs,’ Glynis recounts, ‘to a magazine which often uses whimsical general health pieces. The editor loved the idea. It was a surprise when she asked me to do the article more as a scientific piece, full of case studies and quotes from experts. But the customer is always right, so I did what I was told. Then, without referring back to me, she changed her mind and asked a staff writer to adapt what I’d written into something quirky and gentle – the piece I’d wanted to write all along! It felt like a slap in the face.’

The best course of action is to step out of our writer’s garret, either physically or virtually, and connect with other writers. Fighting those demons on our own is hard work, but it’s much easier with writer friends who understand.

‘I confided again in these two writing friends,’ Glynis continues, ‘who showed me how to see this in a different perspective, that I was better off without an editor like that. One also reminded me that editors come and go. I should save my future ideas for her successor. I’ll also take revenge in a story. These bad feelings might as well be channeled constructively. She won’t be the first editor I’ve killed off in a story!’

Ironically, a crisis of confidence is a good. As Julie says, ‘It means you care, as a writer, about your work and that you want it to be the very best it can be.’ There’s nothing wrong with that. And as Glynis points out, ‘It’s painful going through a crisis in confidence, but often the outcome is positive and makes the suffering worthwhile in the long run.’

The next time your negative demons wake up, try to remain calm. It’s possible to send them to sleep again. Think logically. Remind yourself that such doubts are part of the normal writing process. It means you care about your work and how readers will think about your creation. These crises form part of the everyday business life of a writer, and may never disappear, no matter how successful we become.

Glynis finds this reassuring. ’I’ve recently interviewed Venero Armanno, who heads the creative writing department of the University of Queensland and who has won awards for his novels. He still has crises in confidence. It’s nice to know I’m in very good company.’

Julie Phillips’ Confidence-boosting tip: ‘The best way I know of overcoming the wobbles, that works for me, is to keep writing. Get yourself over that hump, because life is much easier over the other side on the downward slide!’

Glynis Scrivens’ Confidence-boosting tip: ‘ I keep a notebook to remind me of the bright patches. It has a rainbow cover and contains unexpectedly lovely writing experiences. I always know when I’m in a bad patch that it’s a dark bit of the tapestry. The next bright patch is just an email away.’