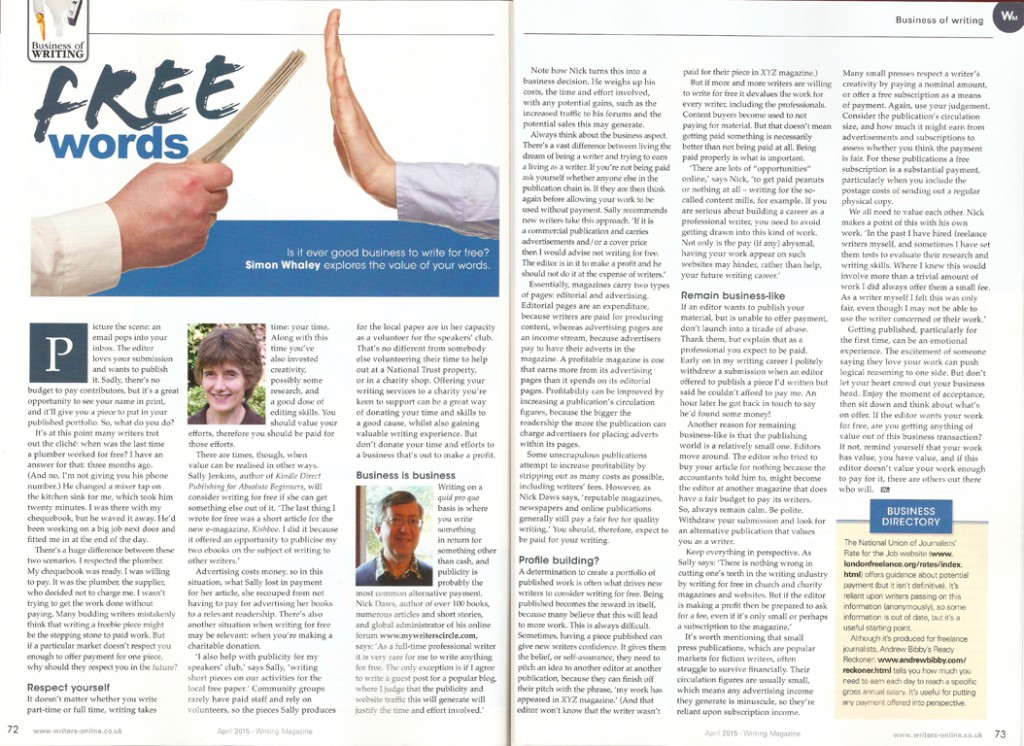 Is it good business to write for free? Simon Whaley explores the value of your words.

Picture the scene: an email pops into your inbox. The editor loves your submission and wants to publish it. Sadly, there’s no budget to pay contributors, but it’s a great opportunity to see your name in print, and it’ll give you a piece to put in your published portfolio. So, what do you do?

It’s at this point many writers trot out the cliché: when was the last time a plumber worked for free? I have an answer for that: three months ago. (And no, I’m not giving you his phone number.) He changed a mixer tap on the kitchen sink for me, which took him twenty minutes. I was there with my chequebook, but he waved it away. He’d been working on a big job next door and fitted me in at the end of the day.

There’s a huge difference between these two scenarios. I respected the plumber. My was chequebook ready. I was willing to pay. It was the plumber, the supplier, who decided not to charge me. I wasn’t trying to get the work done without paying. Many budding writers mistakenly think that writing a freebie piece might be the stepping stone to paid work. But if a particular market doesn’t respect you enough to offer payment for one piece, why should they respect you in the future?

It doesn’t matter whether you write part-time or full time, writing takes time: your time. Along with this time you’ve also invested creativity, possibly some research, and a good dose of editing skills. You should value your efforts, therefore you should be paid for those efforts.

There are times, though, when value can be realised in other ways. Sally Jenkins, author of Kindle Direct Publishing for Absolute Beginners, will consider writing for free if she can get something else out of it. ‘The last thing I wrote for free was a short article for the new e-magazine, Kishboo. I did it because it offered an opportunity to publicise my two e-books on the subject of writing to other writers.’

Advertising costs money, so in this situation, what Sally lost in payment for her article, she recouped from not having to pay for advertising her books to a relevant readership. There’s also another situation when writing for free may be relevant: when you’re making a charitable donation.

‘I also help with publicity for my Speakers’ Club,’ says Sally, ‘writing short pieces on our activities for the local free paper.’ Community groups rarely have paid staff and rely on volunteers, so the pieces Sally produces for the local paper are in her capacity as a volunteer for the Speakers’ Club. That’s no different from somebody else volunteering their time to help out at a National Trust property, or in a charity shop. Offering your writing services to a charity you’re keen to support can be a great way of donating your time and skills to a good cause, whilst also gaining valuable writing experience. But don’t donate your time and efforts to a business that’s out to make a profit.

Writing on a quid pro quo basis is where you write something in return for something other than cash, and publicity is probably the most common alternative payment. Nick Daws, author of over 100 books, numerous articles and short stories, and global administrator of his online forum www.mywriterscircle.com, says, ‘As a full-time professional writer it is very rare for me to write anything for free. The only exception is if I agree to write a guest post for a popular blog, where I judge that the publicity and website traffic this will generate will justify the time and effort involved.’

Note how Nick turns this into a business decision. He weighs up his costs, the time and effort involved, with any potential gains, such as the increased traffic to his forums and the potential sales this may generate.

Always think about the business aspect. There’s a vast difference between living the dream of being a writer and trying to earn a living as a writer. If you’re not being paid ask yourself whether anyone else in the publication chain is. If they are then think again before allowing your work to be used without payment. Sally recommends new writers take this approach. ‘If it is a commercial publication and carries advertisements and/or a cover price then I would advise not writing for free. The editor is in it to make a profit and he should not do it at the expense of writers.’

Essentially, magazines carry two types of pages: editorial and advertising. Editorial pages are an expenditure, because writers are paid for producing content, whereas advertising pages are an income stream, because advertisers pay to have their adverts in the magazine. A profitable magazine is one that earns more from its advertising pages than it spends on its editorial pages. Profitability can be improved by increasing a publication’s circulation figures, because the bigger the readership the more the publication can charge advertisers for placing adverts within its pages.

Some unscrupulous publications attempt to increase profitability by stripping out as many costs as possible, including writers’ fees. However, as Nick Daws says, ‘reputable magazines, newspapers and online publications generally still pay a fair fee for quality writing.’ You should, therefore, expect to be paid for your writing.

A determination to create a portfolio of published work is often what drives new writers to consider writing for free. Being published becomes the reward in itself, because many believe that this will lead to more work. This is always difficult. Sometimes, having a piece published can give new writers confidence. It gives them the belief, or self-assurance, they need to pitch an idea to another editor at another publication, because they can finish off their pitch with the phrase, ‘my work has appeared in XYZ magazine.’ (And that editor won’t know that the writer wasn’t paid for their piece in XYZ magazine.)

But if more and more writers are willing to write for free it devalues the work for every writer, including the professionals. Content buyers become used to not paying for material. But that doesn’t mean getting paid something is necessarily better than not being paid at all. Being paid properly is what is important.

‘There are lots of “opportunities” online,’ says Nick, ‘to get paid peanuts or nothing at all – writing for the so-called content mills, for example. If you are serious about building a career as a professional writer, you need to avoid getting drawn into this kind of work. Not only is the pay (if any) abysmal, having your work appear on such websites may hinder, rather than help, your future writing career.’

If an editor wants to publish your material, but is unable to offer payment, don’t launch into a tirade of abuse. Thank them, but explain that as a professional you expect to be paid. Early on in my writing career I politely withdrew a submission when an editor offered to publish a piece I’d written but said he couldn’t afford to pay me. An hour later he got back in touch to say he’d found some money!

Another reason for remaining business-like is that the publishing world is a relatively small one. Editors move around. The editor who tried to buy your article for nothing because the accountants told him to, might become the editor at another magazine that does have a fair budget to pay its writers. So, always remain calm. Be polite. Withdraw your submission and look for an alternative publication that values you as a writer.

Keep everything in perspective. As Sally says, ‘There is nothing wrong in cutting one’s teeth in the writing industry by writing for free in church and charity magazines and websites. But if the editor is making a profit then be prepared to ask for a fee, even if it’s only small or perhaps a subscription to the magazine.’

It’s worth mentioning that small press publications, which are popular markets for fiction writers, often struggle to survive financially. Their circulation figures are usually small, which means any advertising income they generate is minuscule, so they’re reliant upon subscription income. Many small presses respect a writer’s creativity by paying a nominal amount, or offer a free subscription as a means of payment. Again, use your judgement. Consider the publication’s circulation size, and how much it might earn from advertisements and subscriptions to assess whether you think the payment is fair. For these publications a free subscription is a substantial payment, particularly when you include the postage costs of sending out a regular physical copy.

We all need to value each other. Nick makes a point of this with his own work. ‘In the past I have hired freelance writers myself, and sometimes I have set them tests to evaluate their research and writing skills. Where I knew this would involve more than a trivial amount of work I did always offer them a small fee. As a writer myself I felt this was only fair, even though I may not be able to use the writer concerned or their work.’

Getting published, particularly for the first time, can be an emotional experience. The excitement of someone saying they love your work can push logical reasoning to one side. But don’t let your heart crowd out your business head. Enjoy the moment of acceptance, then sit down and think about what’s on offer. If the editor wants your work for free, are you getting anything of value out of this business transaction? If not, remind yourself that your work has value, you have value, and if this editor doesn’t value your work enough to pay for it, there are others out there who will.

The National Union of Journalists’ Rate for the Job website (http://www.londonfreelance.org/rates/index.html) offers guidance about potential payment (but it isn’t definitive). It’s reliant upon writers passing on this information (anonymously), so some information is out of date, but it’s a useful starting point.

Although it’s produced for freelance journalists, Andrew Bibby’s Ready Reckoner: http://www.andrewbibby.com/reckoner.html tells you how much you need to earn each day to reach a specific gross annual salary. It’s useful for putting any payment offered into perspective.