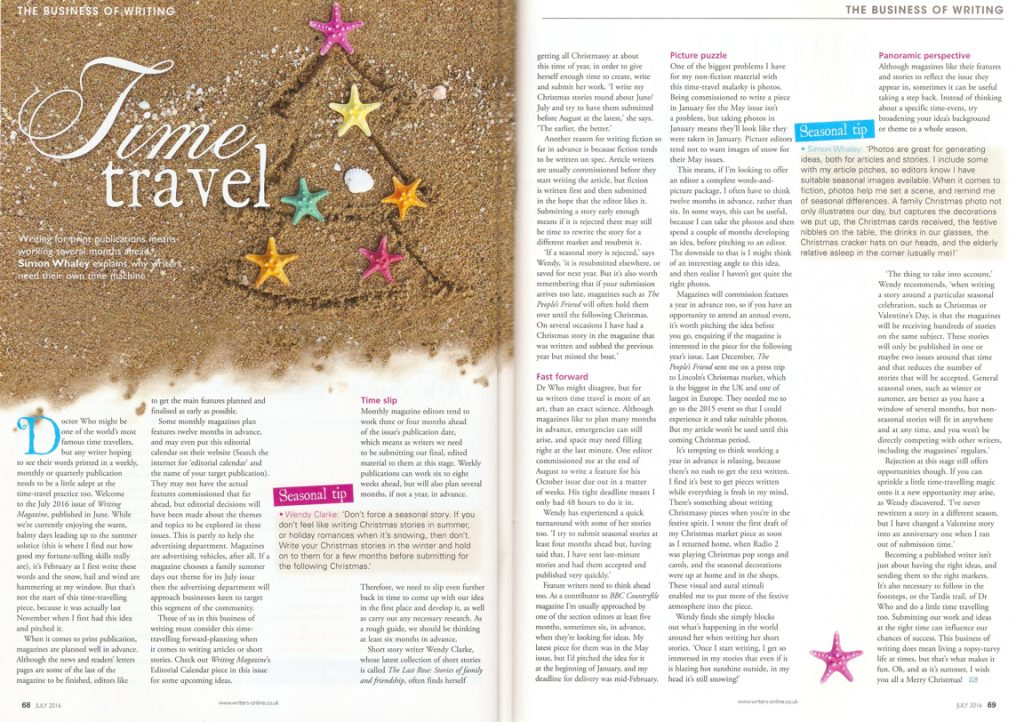 Doctor Who might be one of the world’s most famous time travellers, but any writer hoping to see their words printed in a weekly, monthly or quarterly publication needs to be a little adept at the time-travel practice too. Welcome to the July 2016 issue of Writing Magazine, published in June. While we’re currently enjoying the warm, balmy days leading up to the summer solstice (this is where I find out how good my fortune-telling skills really are), it’s February as I first write these words and the snow, hail and wind are hammering at my window. But that’s not the start of this time travelling piece, because it was actually last November when I first had this idea and pitched it.

When it comes to print publication, magazines are planned well in advance. Although the news and readers’ letters pages are some of the last of the magazine to be finished, editors like to get the main features planned and finalised as early as possible.

Some monthly magazines plan features twelve months in advance, and may even put this editorial calendar on their website (Search the Internet for Editorial Calendar and the name of your target publication). They may not have the actual features commissioned that far ahead, but editorial decisions will have been made about the themes and topics to be explored in these issues. This is partly to help the advertising department. Magazines are advertising vehicles, after all. If a magazine chooses a family summer days out theme for its July issue then the advertising department will approach businesses keen to target this segment of the community.

Those of us in this business of writing must consider this time-travelling forward-planning when it comes to writing articles or short stories. Check out Writing Magazine’s editorial calendar piece in this issue for some upcoming ideas.

Monthly magazine editors tend to work three or four months ahead of the issue’s publication date, which means as writers we need to be submitting our final, edited material to them at this stage. Weekly publications can work six to eight weeks ahead, but will also plan several months, if not a year, in advance. Therefore, we need to slip even further back in time to come up with our idea in the first place and develop it, as well as carry out any necessary research. As a rough guide, we should be thinking at least six months in advance.

Short story writer Wendy Clarke, whose latest collection of short stories is called The Last Rose: Stories of family and friendship, often finds herself getting all Christmassy at about this time of year, in order to give herself enough time to create, write and submit her work. ‘I write my Christmas stories round about June/July and try to have them submitted before August at the latest,’ she says. ‘The earlier, the better.’

Another reason for writing fiction so far in advance is because fiction tends to be written on spec. Article writers are usually commissioned before they start writing the article, but fiction is written first and then submitted in the hope that the editor likes it. Submitting a story early enough means if it is rejected there may still be time to rewrite the story for a different market and resubmit it.

‘If a seasonal story is rejected,’ says Wendy, ‘it is resubmitted elsewhere, or saved for next year. But it’s also worth remembering that if your submission arrives too late, magazines such as The People’s Friend will often hold them over until the following Christmas. On several occasions I have had a Christmas story in the magazine that was written and subbed the previous year but missed the boat.’

Dr Who might disagree, but for us writers time travel is more of an art, than an exact science. Although magazines like to plan many months in advance, emergencies can still arise, and space may need filling right at the last minute. One editor commissioned me at the end of August to write a feature for his October issue due out in a matter of weeks. His tight deadline meant I only had 48 hours to do it in.

Wendy has experienced a quick turnaround with some of her stories too. ‘I try to submit seasonal stories at least four months ahead but, having said that, I have sent last minute stories and had them accepted and published very quickly.’

Article writers need to think ahead too. As a contributor to BBC Countryfile magazine I’m usually approached by one of the section editors at least five months, sometimes six, in advance, when they’re looking for ideas. My latest piece for them was in the May issue, but I’d pitched the idea for it at the beginning of January, and my deadline for delivery was mid-February.

One of the biggest problems I have for my non-fiction material with this time-travel malarky is photos. Being commissioned to write a piece in January for the May issue isn’t a problem, but taking photos in January means they’ll look like they were taken in January. Pictures editors tend not to want images of snow for their May issues.

This means, if I’m looking to offer an editor a complete words-and-picture package, I often have to think twelve months in advance, rather than six. In some ways, this can be useful, because I can take the photos and then spend a couple of months developing an idea, before pitching to an editor. The downside to that is I might think of an interesting angle to this idea, and then realise I haven’t got quite the right photos.

Magazines will commission features a year in advance too, so if you have an opportunity to attend an annual event, it’s worth pitching the idea before you go, enquiring if the magazine is interested in the piece for the following year’s issue. Last December, The People’s Friend sent me on a press trip to Lincoln’s Christmas Market, which is the biggest in the UK and one of largest in Europe. They needed me to go to the 2015 event so that I could experience it and take suitable photos. But my article won’t be used until this coming Christmas period.

It’s tempting to think working a year in advance is relaxing, because there’s no rush to get the text written. I find it’s best to get pieces written while everything is fresh in my mind. There’s something about writing Christmassy pieces when you’re in the festive spirit. I wrote the first draft of my Christmas Market piece as soon as I returned home, when Radio 2 was playing Christmas pop songs and carols, and the seasonal decorations were up at home and in the shops. These visual and aural stimuli enabled me to put more of the festive atmosphere into the piece.

Wendy finds she simply blocks out what’s happening in the world around her when writing her short stories. ‘Once I start writing, I get so immersed in my stories that even if it is blazing hot sunshine outside, in my head it’s still snowing!’

Although magazines like their features and stories to reflect the issue they appear in, sometimes it can be useful taking a step back. Instead of thinking about a specific time-event, try broadening your idea’s background or theme to a whole season.

‘The thing to take into account,’ Wendy recommends, ‘when writing a story around a particular seasonal celebration, such as Christmas or Valentine’s Day, is that the magazines will be receiving hundreds of stories on the same subject. These stories will only be published in one or maybe two issues around that time and that reduces the number of stories that will be accepted. General seasonal ones, such as winter or summer, are better as you have a window of several months, but non-seasonal stories will fit in anywhere and at any time, and you won’t be directly competing with other writers, including the magazines’ regulars.’

Rejection at this stage still offers opportunities though. If you can sprinkle a little time-travelling magic onto it a new opportunity may arise, as Wendy discovered. ‘I’ve never rewritten a story in a different season, but I have changed a Valentine story into an anniversary one when I ran out of submission time.’

So becoming a published writer isn’t just about having the right ideas, and sending them to the right markets. It’s also necessary to follow in the footsteps, or the Tardis trail, of Dr Who and do a little time travelling too. Submitting our work and ideas at the right time can influence our chances of success. This business of writing does mean living a topsy-turvy life at times, but that’s what makes it fun. Oh, and as it’s summer, I wish you all a Merry Christmas!

Simon Whaley: ‘Photos are great for generating ideas, both for articles and stories. I include some with my article pitches, so editors know I have suitable seasonal images available. When it comes to fiction,  photos help me set a scene, and remind me of seasonal differences. A family Christmas photo not only illustrates our day, but captures the decorations we put up, the Christmas cards received, the festive nibbles on the table, the drinks in our glasses, the Christmas cracker hats on our heads, and the elderly relative asleep in the corner (usually me)!’