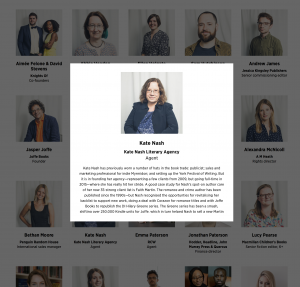 Many congratulations to my agent, Kate Nash, who’s been selected as one of The Bookseller’s Rising Stars of 2018. To be recognised in this way … 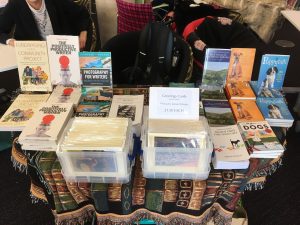 I was lucky enough yesterday to be involved in the inaugural Telford Write Now, Right Now Literary Festival, which took place as part of the Telford@50 celebrations. It’s always a little daunting when you establish something new, because you never know whether all of the hard work will pay off, or whether any of the publicity that’s been arranged will generate any interest. Overall, though, it was a great day.

I’ve a new post on my Business of Writing blog for writers this morning: Spacebar trampolining.

My lovely agent, Kate Nash, is auctioning a query critique to help raise money for the British Red Cross to support the residents of the … 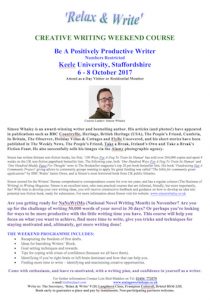 Got plans to do NaNoWriMo (National Novel Writing Month) this year? Or does the thought of writing 50,000 words in 30 days fill you with dread? Perhaps my next course for Lois Maddox’s Relax and Write organisation might be just what you’re looking for.

Microsoft, who bought the Wunderkind software company in 2015, has announced that development of their productivity software, Wunderlist, will cease, and the software will be withdrawn at some point in the next few months.

Staff are now focussing on a Microsoft To-Do programme called ‘To-Do’, which is in its infancy, but will be developed further over the coming months.

Thank you to Lois, Liz, Sally and Daren for all their hard work at last weekend’s Relax & Write Short Story Retreat, which I was running at the rather impressive Royal Agricultural University, near Cirencester.

My thanks go to the 262,468 people who bought a copy of One Hundred Ways For A Dog To Train Its Human, since it was …

My entry into last year’s Senior Travel Expert ‘Off the Beaten Track’ competition has just been published. To read the full entry, click here. …

My next collection of short stories, previously published in a variety of women’s magazines and other outlets, is now available, as is a box set …