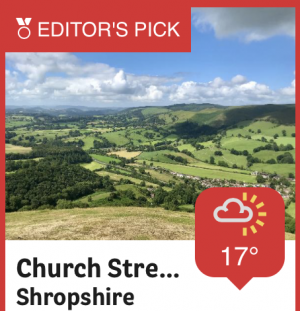 Last night’s Countryfile programme was from Shropshire – in fact, it was from just the other side of the Long Mynd, here in Church Stretton.

I’d already climbed Ragleth Hill earlier in the morning, appreciating the sunshine we hadn’t seen for a few days. Walking to the end of the hill, where the telegraph pole crowns the southern tip, I took a photo of All Stretton and the Long Mynd under a blue sky with some cloud.

It wasn’t until I was watching BBC Countryfile, that I realised they might use a Shropshire Weather Watcher photo during the long-range weather forecast. Logging onto my account, I spotted the coveted Editor’s Pick label! Could it be, I wondered.

Moments later, up popped the weather present, Nick Miller, and then he cut to … my photo. 😁

And then, the following morning, Carol Kirkwood on BBC Breakfast also used the image during her national weather forecasts on the half hour!