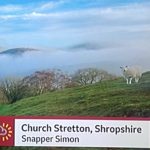 The weather today was absolutely stunning. I just had to go up Ragleth Hill, because I knew that although the streets were shrouded in fog, I could see clear skies were above them. This is inversion weather.

I love the way the mists slide along the contours of the hills at this time of year. I was focussing on the swirls around Caer Caradoc, completely oblivious of the sheep coming around the hill to look at what I was doing. Shefali liked it though!

But that wasn’t my only Editor’s Pick of the day! (Told you it was a good day, today!)

At the far end of Ragleth Hill, I was at the right spot to witness a Brocken Spectre. This ghostly apparition (I prefer angelic appearance) occurs when the sun is behind you and above you, thus casting your shadow below you. But during an inversion, your shadow floats on the cloud below, and the sun’s rays create a rainbow effect as it refracts off the mist surrounding your shadow.

The BBC Weather twitter feed picked up on this, and used it to link to a video Darren Betts had produced explaining this rare(ish) phenomenon.