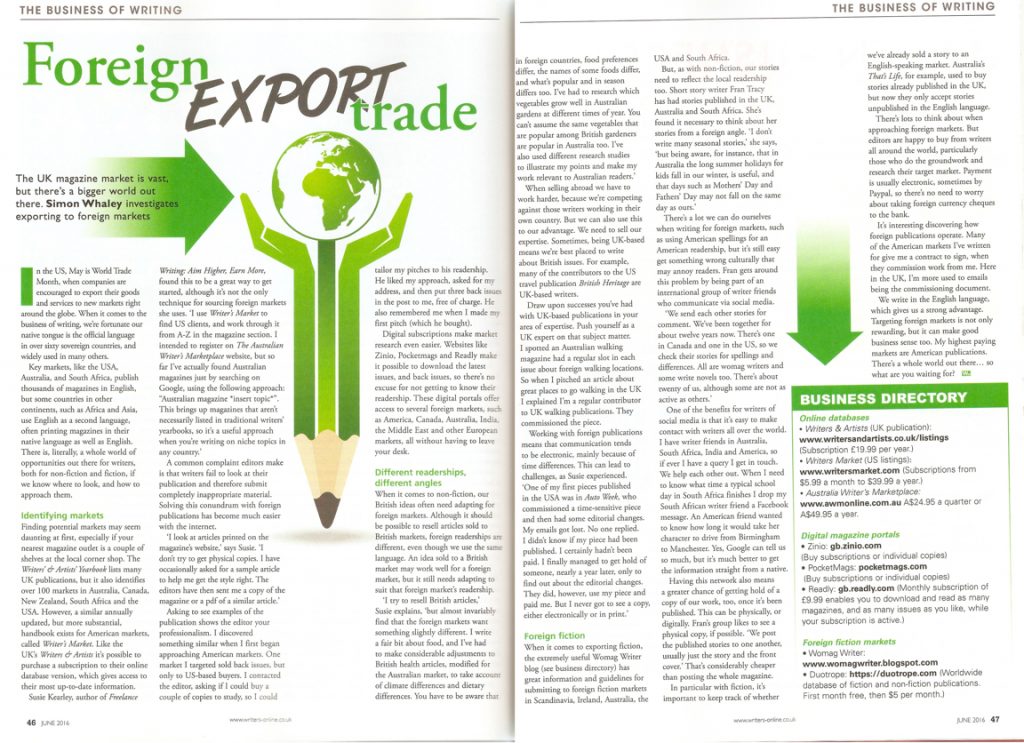 The UK magazine market is vast, but there’s a bigger world out there. Simon Whaley investigates exporting to foreign markets

In America, May is World Trade Month when companies are encouraged to export their goods and services to new markets right around the globe. When it comes to the business of writing, we’re fortunate our native tongue is the official language in over 60 sovereign countries, and widely used in many others.

Key markets like the USA, Australia, and South Africa, publish thousands of magazines in English, but some countries in other continents, such as Africa and Asia, use English as a second language, often printing magazines in their native language as well as English. There is, literally, a whole world of opportunities out there for writers, both for non-fiction and fiction, if we know where to look, and how to approach them.

Finding potential markets may seem daunting at first, especially if your nearest magazine outlet is a couple of shelves at the local corner shop. The Writers’ and Artists’ Yearbook lists many UK publications, but it also identifies over 100 markets in Australia, Canada, New Zealand, South Africa and the USA. However, a similar annually updated, but more substantial, handbook exists for American markets, called the Writer’s Market. Like the UK’s Writers & Artists it’s possible to purchase a subscription to their online database version, which gives access to their most up to date information.

Susie Kearley, author of Freelance Writing: Aim Higher, Earn More, found this to be a great way to get started, although it’s not the only technique for sourcing foreign markets she uses. ‘I use Writer’s Market to find US clients, and work through it from A-Z in the magazine section. I intended to register on the Australian Writer’s Marketplace website, but so far I’ve actually found Australian magazines just by searching on Google, using the following approach: “Australian magazine *insert topic*”. This brings up magazines that aren’t necessarily listed in traditional writers’ yearbooks, so it’s a useful approach when you’re writing on niche topics in any country.’

A common complaint editors make is that writers fail to look at their publication and therefore submit completely inappropriate material. Solving this conundrum with foreign publications has become much easier with the Internet.

‘I look at articles printed on the magazine’s website,’ says Susie. ‘I don’t try to get physical copies. I have occasionally asked for a sample article to help me get the style right. The editors have then sent me a copy of the magazine or a PDF of a similar article.’

Asking to see examples of the publication shows the editor your professionalism. I discovered something similar when I first began approaching American markets. One market I targeted sold back issues, but only to US-based buyers. I contacted the editor, asking if I could buy a couple of copies to study, so I could tailor my pitches to his readership. He liked my approach, asked for my address, and then put three back issues in the post to me, free of charge. He also remembered me when I made my first pitch (which he bought).

Digital subscriptions make market research even easier. Websites like Zinio, Pocketmags and Readly, make it possible to download the latest issues, and back issues, so there’s no excuse for not getting to know their readership. These digital portals offer access to several foreign markets, such as America, Canada, Australia, India, the Middle East and other European markets, all without having to leave your desk.

When it comes to non-fiction, our British ideas often need adapting for foreign markets. Although it should be possible to resell articles sold to British markets, foreign readerships are different, even though we use the same language. An idea sold to a British market may work well for a foreign market, but it still needs adapting to suit that foreign market’s readership.

‘I try to resell British articles,’ Susie explains, ‘but almost invariably find that the foreign markets want something slightly different. I write a fair bit about food, and I’ve had to make considerable adjustments to British health articles, modified for the Australian market, to take account of climate differences and dietary differences. You have to be aware that in foreign countries, food preferences differ, the names of some foods differ, and what’s popular and in season differs too. I’ve had to research which vegetables grow well in Australian gardens at different times of year. You can’t assume the same vegetables that are popular among British gardeners are popular in Australia too. I’ve also used different research studies to illustrate my points and make my work relevant to Australian readers.’

When selling abroad we have to work harder, because we’re competing against those writers working in their own country. But we can also use this to our advantage. We need to sell our expertise. Sometimes, being UK-based means we’re best placed to write about British issues. For example, many of the contributors to the US travel publication British Heritage are UK-based writers.

Draw upon successes you’ve had with UK-based publications in your area of expertise. Push yourself as a UK expert on that subject matter. I spotted an Australian walking magazine had a regular slot in each issue about foreign walking locations. So when I pitched an article about great places to go walking in the UK I explained I’m a regular contributor to UK walking publications. They commissioned the piece.

Working with foreign publications means that communication tends to be electronic, mainly because of time differences. This can lead to challenges, as Susie experienced. ‘One of my first pieces published in the USA was in Auto Week, who commissioned a time-sensitive piece and then had some editorial changes. My emails got lost. No one replied. I didn’t know if my piece had been published. I certainly hadn’t been paid. I finally managed to get hold of someone, nearly a year later, only to find out about the editorial changes. They did, however, use my piece and paid me. But I never got to see a copy, either electronically or in print.’

When it comes to exporting fiction, the extremely useful Womag Writer’s blog (see Business Directory) has great information and guidelines for submitting to foreign fiction markets in Scandinavia, Ireland, Australia, the USA and South Africa.

But, as with non-fiction, our stories need to reflect the local readership too. Short story writer Fran Tracy has had stories published in the UK, Australia and South Africa. She’s found it necessary to think about her stories from a foreign angle. ‘I don’t write many seasonal stories,’ she says, ‘but being aware, for instance, that in Australia the long summer holidays for kids fall in our winter, is useful, and that days such as Mothers’ Day and Fathers’ Day may not fall on the same day as ours.’

There’s a lot we can do ourselves when writing for foreign markets, such as using American spellings for an American readership, but it’s still easy get something wrong culturally that may annoy readers. Fran gets around this problem by being part of an international group of writer friends who communicate via social media.

‘We send each other stories for comment. We’ve been together for about 12 years now. There’s one in Canada and one in the US, so we check their stories for spellings and differences. All are womag writers and some write novels too. There’s about 20 of us, although some are not as active as others.’

One of the benefits for writers of social media is that it’s easy to make contact with writers all over the world. I have writer friends in Australia, South Africa, India and America, so if ever I have a query I get in touch. We help each other out. When I need to know what time a typical school day in South Africa finishes I drop my South African writer friend a Facebook message. An American friend wanted to know how long it would take her character to drive from Birmingham to Manchester. Yes, Google can tell us so much, but it’s much better to get the information straight from a native.

Having this network also means a greater chance of getting hold of a copy of our work, too, once it’s been published. This can be physically, or digitally. Fran’s group likes to see a physical copy, if possible. ‘We post the published stories to one another, usually just the story and the front cover.’ That’s considerably cheaper than posting the whole magazine.

In particular with fiction, it’s important to keep track of whether we’ve already sold a story to an English-speaking market. Australia’s That’s Life, for example, used to buy stories already published in the UK, but now they only accept stories unpublished in the English language.

There’s lots to think about when approaching foreign markets. But editors are happy to buy from writers all around the world, particularly those who do the groundwork and research their target market. Payment is usually electronic, sometimes by Paypal, so there’s no need to worry about taking foreign currency cheques to the bank.

It’s interesting discovering how foreign publications operate. Many of the American markets I’ve written for give me a contract to sign, when they commission work from me. Here in the UK, I’m more used to emails being the commissioning document.

We write in the English language, which gives us a strong advantage. Targeting foreign markets is not only rewarding, but it can make good business sense too. My highest paying markets are American publications. There’s a whole world out there … so what are you waiting for?

Writers Market (USA listings) www.writersmarket.com (Subscriptions from $5.99 a month to $39.99 a year.)

Readly gb.readly.com. (Monthly subscription of £9.99 enables you to download and read as many magazines, and as many issues as you like, while your subscription is active.)