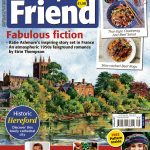 My feature on Hereford appeared in The People’s Friend’s issue dated 28th September 2019. When Alex, the Features Editor, commissioned me to write it I jumped at the chance, even though the city is only 40 miles from where I live, and it’s a place where I’ve worked from time to time (both Herefordshire Council, and the Diocese of Hereford have offices there).

As is so often the case, even though Hereford is right on my doorstep, there were so many places I hadn’t visited. This feature gave me the opportunity to put that right.

When I worked for Herefordshire Council, we used to undertake training courses at the Castle Green training centre. In all the times I went there, I never really noticed Nelson’s column. (Yes, Hereford has its own Nelson’s Column!)

You probably wouldn’t know it as Nelson’s column because there is no statue of Nelson on top of it. That’s what happens when the money runs out. Nelson was made freeman on the city in 1802, and the column was erected in 1809, four years after his death.

Hereford Cathedral dominates the city skyline, but at its feet is a wonderful statue to Elgar, who is standing, leaning against his bicycle, while holding a notebook and pencil. He’s standing there in quiet contemplation, perhaps conjuring up a new tune. The detail on the statue is exquisite.

Nobody should visit Hereford without visiting the Cathedral and its associated Mappa Mundi and Chained Library exhibitions. Do chat to the volunteer guides, too, for they are full of fascinating information about these exhibits. (Hint: ask them where the case for the Mappa Mundi was found.)

And look out for the Hereford Bull. It dominates the pedestrianised city centre, near to the fascinating Black and White House.

For more information about what to see and do in Hereford (such as the Hereford Cider Museum and the Hereford Waterworks), check out www.visitherefordshire.co.uk