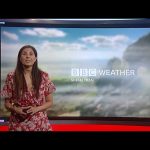 I set off early this morning towards The Wrekin to tackle a route for Country Walking magazine. The national forecast had said that any cloud first thing this morning would soon disperse. So, it was with a little trepidation that I drove along the A49 towards Shrewsbury with my lights on and my windscreen wipers flapping frantically across the windscreen. Nobody had mentioned rain.

Still, by the time I’d parked and set off climbing The Wrekin, things were definitely drier. But by the time I got to The Wrekin’s summit, the views were … a little misty.

If you look in the distance, you can see it was brightening up, albeit rather more slowly than I’d have liked. Never mind. I have several photos in my photographic library of the views from the top of The Wrekin in sunnier climes, so it wasn’t a catastrophe. The important thing with these routes for Country Walking is that I capture the up-to-date footpath status of what things are like on the ground.

By the time I’d reached the bottom of The Wrekin, the sky was all blue. The cloud had dissipated, and the rest of my walk continued in glorious weather. It clearly put me in a good mood, for when I got to the end of the walk, I looked up – saw the blue sky – and though, I might as well just climb to the top again. I’ll get some nicer photos this time. Which is what I did. I climbed The Wrekin for the second time that day!

And, it was definitely worth it.

Naturally, I’d taken a few photos and uploaded them to the BBC WeatherWatcher website, but I was still delighted to see the following screen on the late night regional news broadcast.

And yes! Shefali had chosen one of my photos taken from the second climb up The Wrekin.

So, was I mad to climb The Wrekin twice in one day? Probably. But it was worth it 😁.