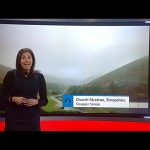 It’s been a while since Shefali last used me on the regional weather forecast. I thought she’d gone off me! It turns out, she hadn’t gone off me, but gone off my photos. Or, rather, gone off the poor quaity of my photos.

A few months ago I upgraded my mobile phone. (All of my WeatherWatcher photos are taken on my smartphone.) And despite uploading a photo nearly everyday, none were chosen. Then I began scrutinising my images more and discovered that they were blurred. Any landscape photo (where the focal point was on the horizon, or in the distance) was blurred. No wonder my photos weren’t being picked!

So I had to send my phone back for repair. However, the retailer advised me that the camera in my smartphone was unrepairable, so they issued me with a replacement. (Thank heavens for being under warranty!)

And a few days later, Shefali picked this photo … which suggests my replacement smartphone is working properly. Normal service has been resumed, as they say! 😁