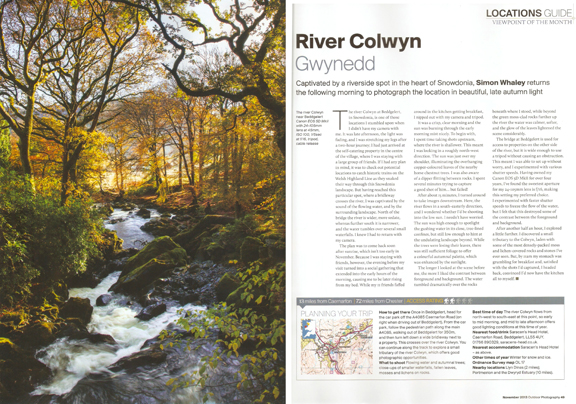 Captivated by a riverside spot in the heart of Snowdonia, Simon Whaley returns the following morning to photograph the location in beautiful, late autumnal light.

The River Colwyn at Beddgelert, in Snowdonia, is one of those chance discoveries I stumbled across when I didn’t have my camera with me. It was late afternoon, the light was fading and I was stretching my legs after a two-hour journey, having just arrived at the self-catering property I and eleven friends had hired in the centre of the village. If I had any plan in mind it was to check out potential locations to catch historic trains on the Welsh Highland Line as they snaked their way through this Snowdonian landscape. Yet, at this particular spot, where a bridleway crosses the river, I was captivated by the sound of the water, heavier after earlier rain during the day, and the context of the landscape. North of the bridge the river is wider, more sedate, whereas southwards it is narrower, tumbling over several small waterfalls. I knew I had to return with my camera.

The new plan was to come back soon after sunrise, which isn’t too early at this time in November, but, because I was staying with friends, the night before turned into a social gathering that extended into the early hours of the morning, leading me to be later rising from my bed. Still, whilst eleven friends faffed around in the kitchen for breakfast, I nipped out with my camera and tripod.

It was a crisp, clear morning and the sun was burning through the early morning mist nicely. At first, I spent time taking numerous shots upstream, of the river’s shallower waters, which meant I was looking roughly northwestwards. The sun was just over my shoulder, illuminating the overhanging copper-coloured leaves of the nearby horse chestnut trees. I was also aware of a dipper flitting between rocks, and spent several minutes trying to capture a good shot of him … but failed!

After about fifteen minutes, I turned around to take images downstream, which flows southeastwards, and wondered whether I’d be shooting into the winter sunlight. I needn’t have worried. The sun was high enough to spotlight the gushing water in its close, tree-lined confines, but still low enough to hint at the relief on the ground in the distance, around the foot of the beech trees. Whilst the trees were losing their leaves, there were still sufficient numbers on the branches to offer a colourful autumnal palette, enhanced by the sunlight.

The longer I looked at the scene before me, the more I liked the contrast between foreground and background. The foreground was neatly agitated by the tumbling waters of the River Colwyn, which were more subdued this morning than the previous night, and the dark greenness of the moss on the rocks, in addition to the leaves at the bottom of the frame. However, in the background the river’s waters were calmer, softer and the oranges, yellows and browns lightened the scene considerably.

The bridge here is wide enough to set up a tripod and allow the occasional vehicle to pass by without hinderance (some properties use it for access), enabling me to set up without worry, and experiment with shutter speeds, altering the movement impact of the river in the photos. Having lived with my Canon 5D Mark II for over four years, I’ve found the sweetest aperture of my 24-105mm lens is at f/16, making it my preferred aperture. I experimented with faster shutter speeds to freeze the water’s movements, but I felt that destroyed some of the foreground/background contrast.

After another half an hour, I explored a little further, discovering a small tributary to the Colwyn, laden with some of the most densely-packed moss and lichen-covered rocks and stones I’ve ever seen. But, by 11 o’clock my stomach was grumbling for breakfast and, satisfied with the shots I’d captured, I headed back, convinced I’d now have the self-catering kitchen all to myself.

How to get there:

In Beddgelert, head for the car park off the A4085 Caernarfon Road (on right when driving out of Beddgelert). From the car park, follow the pedestrian path along the main A4085, walking out of Beddgelert for 350 metres, then turn left down a wide bridleway, beside a property. This crosses over the River Colwyn. (Continue along the track to explore a small tributary to the River Colwyn which offers good photographic opportunities.)

The River Colwyn amongst autumnal trees. Also good for close-ups of smaller waterfalls, wet rocks and fallen leaves or mosses and lichens on rocks.

The River Colwyn flows from north-west to south-east at this point, so early to mid morning, and mid-to-late afternoon offers good lighting conditions at this time of year.

The Saracens Head – as above.

Other times of year:

Winter for snow and ice: this is Snowdonia!