How many cameras does it take to catch a fridge thief? 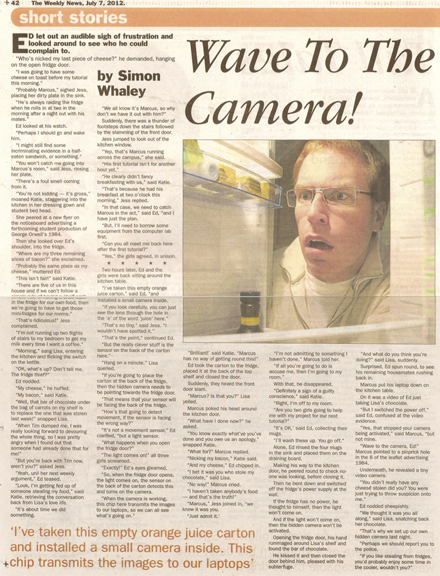 Ed let out an audible sigh of frustration and looked around to see who he could complain to. ‘Who’s nicked my last piece of cheese?’ he demanded, hanging on the open fridge door. ‘I was going to have some cheese on toast before my tutorial this morning.’

‘Probably Marcus,’ sighed Jess, placing her dirty plate in the sink. ‘He’s always raiding the fridge when he rolls in at two in the morning after a night out with his mates.’

Ed looked at his watch. ‘Perhaps I should go and wake him. I might still find some incriminating evidence in a half-eaten sandwich, or something.’

‘You won’t catch me going into Marcus’s room,’ said Jess, rinsing her plate. ‘There’s a foul smell coming from it.’

‘You’re not kidding – it’s gross,’ moaned Kirsty, staggering into the kitchen in her dressing gown and student bed head. She peered at a new flyer on the noticeboard advertising a forthcoming student production of George Orwell’s 1984. Then she looked over Ed’s shoulder, into the fridge. ‘Where are my three remaining slices of bacon?’ she exclaimed.

‘Probably the same place as my cheese,’ muttered Ed.

‘This isn’t fair!’ said Kirsty. ‘There are five of us in this house and if we can’t follow a simple rule of having a shelf each in the fridge for our own food, then we’re going to have to get those mini-fridges for our rooms.’

‘That’s ridiculous!’ Jess complained. ‘I’m not running up two flights of stairs to my bedroom to get my milk every time I want a coffee.’

‘Morning,’ sang Lisa, entering the kitchen and flicking the switch on the kettle. ‘Okay, what’s up? Don’t tell me. The fridge thief?’

‘Well, that bar of chocolate under the bag of carrots on my shelf is to replace the one that was stolen last week,’ snapped Lisa. ‘When Tim dumped me, I was really looking forward to devouring the whole thing, so I was pretty angry when I found out that someone had already done that for me!’ The kettle boiled and she poured the water into a mug.

‘But you’re back with Tim now, aren’t you?’ asked Jess.

‘Yeah, till her next weekly argument,’ Ed teased.

‘Look, I’m getting fed up of someone stealing my food,’ said Kirsty, retrieving the conversation back from Lisa’s love life. ‘It’s about time we did something. We all know it’s Marcus, so why don’t we have it out with him?’

Suddenly, there was a thunder of footsteps down the stairs followed by the slamming of the front door. Jess jumped to look out of the kitchen window. ‘Yep. That’s Marcus running across the campus. His first tutorial is not for another hour yet.’

‘He clearly didn’t fancy breakfasting with us,’ said Kirsty.

‘That’s because he had his breakfast at two o’clock this morning,’ Jess replied.

‘In that case, we need to catch Marcus in the act,’ said Ed, ‘and I have just the plan. But, I’ll need to borrow some equipment from the computer lab first. Can you all meet me back here after the first tutorial?’

‘Yes,’ the girls agreed, in unison.

Two hours later, Ed and the girls were back sitting around the kitchen table.

‘I’ve taken this empty orange juice carton,’ said Ed, ‘and installed a small camera inside. If you look carefully, you can just see the lens through the hole in the ‘e’ of the word ‘juice’ here.’

‘That’s the point,’ continued Ed. ‘But, the really clever stuff is the sensor on the back of the carton here.’

‘It’s not a movement sensor,’ Ed clarified, ‘but a light sensor. What’s the first thing that happens when you open the fridge door?’

‘The light comes on!’ all three girls screamed.

‘Exactly! So, when the fridge door is opened, the light comes on, the sensor on the back of the carton detects this and turns on the camera. When the camera is working, this chip here, transmits the images to our laptops, so we can all see what’s going on.’

‘Brilliant!’ said Kirsty. ‘Marcus has no way of getting round this one now!’

Ed took the carton to the fridge, placed it at the back of the top shelf and closed the door. Suddenly, they heard the front door slam.

‘Marcus? Is that you?’ Lisa yelled.

Marcus poked his head around the kitchen door. ‘What have I done now?’

‘You know exactly what’ve you’ve done and you owe us an apology,’ snapped Kirsty.

‘And my cheese,’ Ed chipped in.

‘I bet it was you who stole my chocolate,’ said Lisa.

‘No way! I haven’t taken anybody’s food and that’s the truth!’

‘I’m not admitting to something I haven’t done,” Marcus told her. “If all you’re going to do is accuse me, then I’m going to my room.’ With that, he disappeared.

‘Definitely a sign of a guilty conscience,’ said Kirsty. ‘Right, I’m off to my room. Are you two girls going to help me with my project for our next tutorial?’

Alone, Ed rinsed the four mugs in the sink and placed them on the draining board. Making his way to the kitchen door, he peered round to check no-one was looking, before closing it. Then he bent down and switched off the fridge’s power supply at the wall. If the fridge has no power, he thought to himself, then the light won’t come on. And if the light won’t come on, then the hidden camera won’t be activated.

Opening the fridge door, his hand rummaged around Lisa’s shelf and found the bar of chocolate. He kissed it and then closed the door, pleased with his subterfuge.

‘And what do you think you’re doing?’ said Lisa, suddenly.

Surprised, Ed spun round, to see his remaining housemates rushing back in. Marcus put his laptop down on the kitchen table. On it was a video of Ed just taking Lisa’s chocolate.

‘But I switched the power off,’ said Ed, confused at the video evidence.

‘Yes, that stopped your camera being activated,’ said Marcus, ‘but not mine. Wave to the camera, Ed!’ Marcus pointed to a pinprick hole in the 8 of the leaflet advertising 1984. Underneath, he revealed a tiny video camera. “You didn’t really have any cheese stolen did you? You were just trying to throw suspicion onto me.’

“We thought it was you all along,” said Lisa, snatching back her chocolate. ‘That’s why we set up our own hidden camera last night. Perhaps we should report you to the Police. If you like stealing from fridges, you’d probably enjoy some time in the cooler, wouldn’t you?’