Things were going from bad to worse in the family home, and poor Matthew didn’t know what to do … 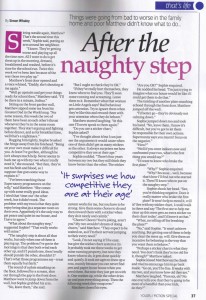 “Sitting outside again Matthew?  That’s the second time this week,” Sophie said, putting an arm around her neighbour.

“I know. They’re getting worse and playing up all the time now. All I want to do is get them up in the morning, dressed, breakfasted and washed, before it’s time for the school run. Twice this week we’ve been late because of they way those two play up.”

“Well go upstairs and get your things ready for school then,” Matthew said.  “I’ll be there in a minute Joshua.”

Sitting on the front garden wall, Matthew sipped some tea from his Greatest Dad in the World mug. “For some reason this week the two of them have been at each other’s throat whenever they’re in the same room together. They start arguing and fighting before dinner, and as for breakfast time, well, that’s a nightmare.”

Hugging him tightly, Sophie brushed the fringe away from his forehead.  “Being on your own must make it difficult for you. At least I’ve got Ben, although he isn’t always much help. Never seems to back me up with my two when I really need it,” she moaned. “But then, they’re not his flesh and blood, so I suppose that goes someway to explain it.”

“I’ve been watching those Supernanny programmes on the telly,” said Matthew. “She comes up with some really good ideas. I tried that ‘timeout’ the other week, but it didn’t work. The problem with my two is that they quite enjoy being shut in a separate room on their own. Apparently, it’s the only way to get some peace and quiet in our house, and I have to agree.”

“What about the naughty step,” suggested Sophie? “That really works with mine.”

“The naughty step is about all that works, but only when one of them is playing up. The problem I’ve got in the mornings is that they both wind each other up, and if I punish one, then I really should punish the other shouldn’t I? That’s what those programmes say – treat them equally but fairly.”

The sound of a plate smashing on the floor, followed by a scream, shot out through the gap in the front door. Matthew went to jump down from the wall, but Sophie grabbed his arm.

“But I ought to check they’re okay.”

“If they’ve really hurt themselves, they know where to find you. They’ll soon come running and screaming. Leave them to it. Remember what that woman on Little Angels says? Bad behaviour gets attention. Try to ignore them when they’re like this and reward them with your attention when they do behave.”

Matthew started laughing.  “At this rate I’ll never speak to them again!”

“Do you use a sticker chart?” Sophie asked.

“I’ve thought about it. But I can just see the arguments it would cause when one of them didn’t get as many stickers as the other. It always surprises me how competitive they are at their age.”

Sophie nodded. “There’s four years between my two but they still think they know better than the other. The sticker system works for me, but you have to be strong. Give them some chores to do and then reward them with a sticker when they do it nicely and calmly.”

“Chores! Chores! You’re joking aren’t you? My two wouldn’t dream of doing chores,” said Matthew. “They expect to be waited on, as if I’m their servant jumping to their every need.”

“Look, I’m not saying it’ll be easy, but give the sticker chart system a try. It probably took me three weeks to get mine running properly, but now they know what to do, it gets done quickly and quietly. It took me ages to draw up a rota, mainly because you can never find pen and paper in our house when you need them. But now they just get on with it. One washes up, whilst the other dries up and puts everything away. Then the following week they swap over.”

“Are you okay?” Sophie enquired.

He nodded his head. “I’m just trying to imagine what our house would be like if I could get them to do that.”

The tinkling of another plate smashing echoed through the front door.  Matthew jumped off the wall.

Sophie jumped down too and took his hand. “No, leave them. I know it’s difficult, but you’ve got to let them be responsible for their own actions. Supernanny says you mustn’t focus on the negative.”

“Well, if you went indoors now and confronted your two, what’s the first thing you would say?”

“I’d want to know who broke the first plate.”

“Why?  Because … well, because that’s how I’ll find out who started it. Then I’ll know who to put on the naughty step.”

Sophie shook her head. “See, you’re thinking negative. Does it really matter who broke the first plate? It won’t help to mend it, will it? See with my sticker chart, I could walk in there and say ‘The first one to help me clear up this mess gets an extra sticker on their chart today’, and I’d leave it at that.”

“What, no telling off for breaking the plate?”

“No,” said Sophie. “It won’t achieve anything. But getting one of them to help you clear the mess up, will. Give them an incentive for behaving in the way that you want them to behave.”

“Perhaps a sticker chart is what they need. You don’t think they’re too old for it though?” Matthew asked.

Sophie kissed Matthew on the cheek and tried to encourage him to go back inside. “Go on, you’ll be fine. It works with my two, and you know how old they are.”

Matthew laughed. “Parents eh? No one ever tells you that they’re going to be more of a handful than your kids, do they?”