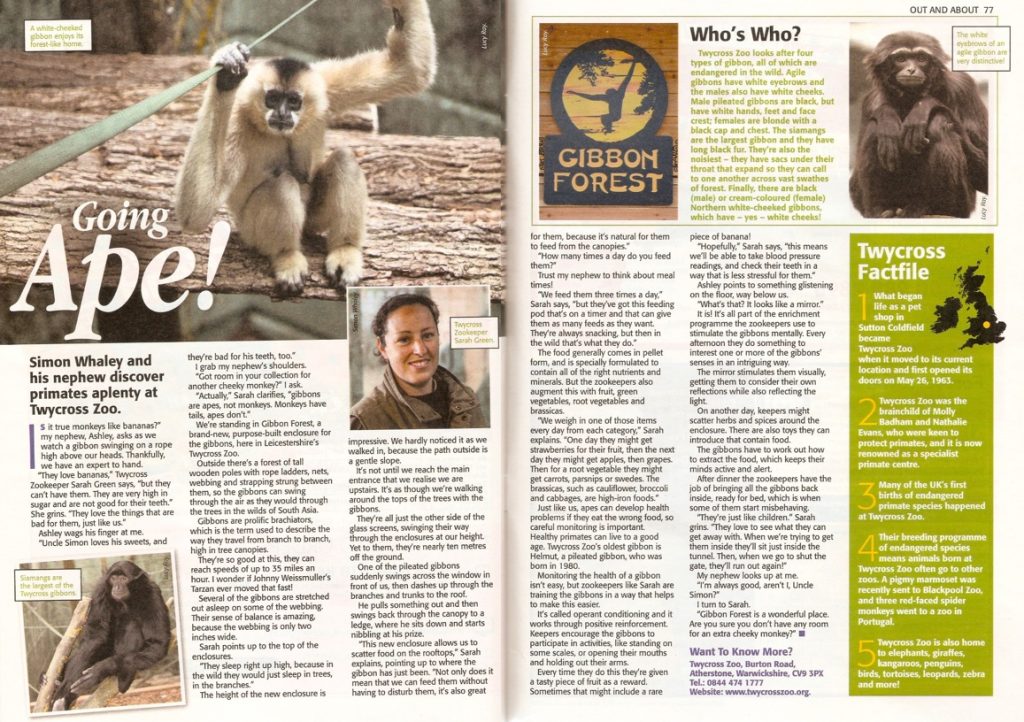 “Is it true monkeys like bananas?” my nephew, Ashley, asks as we watch a gibbon swinging on a rope high above our heads. Thankfully, we have an expert to hand.

“They love bananas,” says Twycross Zookeeper Sarah Green, “but they can’t have them. They are very high in sugar and are not good for their teeth.” She grins. “They love the things that are bad for them, just like us.”

Ashley wags his finger at me. “Uncle Simon loves his sweets, and they’re bad for his teeth too.”

I grab my nephew’s shoulders. “Got room in your collection for another cheeky monkey, by any chance?” I ask.

We’re standing in Gibbon Forest, a brand new, purpose-built enclosure for the gibbons, here in Leicestershire’s Twycross Zoo, which is ten times bigger than their previous home. Outside there’s a forest of tall wooden poles, with rope ladders, nets, webbing and strapping strung between them, so the gibbons can swing through the air as they would through the trees in the wilds of South Asia. Gibbons are prolific brachiators, which is the term used to describe the way they travel from branch to branch, high in tree canopies. They’re so good at this, they can reach speeds of up to 35 miles an hour. I wonder if Johnny Weissmuller’s Tarzan ever reached those speeds!

Twycross looks after four types of gibbon, all of which are endangered in the wild. Agile gibbons have white eyebrows and the males also have white cheeks. Pileated gibbons are black, but have white hands, feet and face crest. The siamangs are the largest gibbon and they have long black fur. They’re also the noisiest because they have sacs under their throat that expand so they can call to one another across vast swathes of forest. Finally, there are the Northern white-cheeked gibbons, which are black with, yes, you guessed it, white cheeks!

We spot a siamang gibbon sitting in one of the enclosure’s openings. He looks like he can’t decided whether to go outside or not. It’s supposed to be summer, but it’s not very warm out there today. Inside it’s lovely and cosy.

Sarah tells us why. “All gibbons come from Asia, so we heat the enclosures to between 25 and 28 degrees celsius, which makes them nice and toasty inside.”

“Do they like the snow in winter?” Ashley asks.

“Actually, they do quite like the snow,” says Sarah. “They can go outside all year round, so they often go out, pick it up and eat it. But they can always come back inside, into the warm, at any time.”

Looking around today, it seems the warmth is making them drowsy. Several of the gibbons are stretched out asleep on some of the webbing. Their sense of balance is amazing, because the webbing is only two inches wide.

Ashley asks Sarah another question. “So do gibbons sleep on the floor, or do they have a special bed?”

Sarah points up to the top of the enclosures. “They sleep right up high, because in the wild they would just sleep in trees, in the branches. They’ll find a nook in a tree and fall asleep there. Some sleep out on the nets we’ve made, others sleep on the tops of the upright poles.”

The height of the new enclosure is impressive. We hardly noticed it as we walked in, because the path outside is a gentle slope that meanders through the gibbons’ outside play area. It’s not until we reached the main entrance that we realised we were upstairs in the enclosure. This works really well because, as Sarah guides us around, it’s as though we’re walking around the tops of the trees with the gibbons. They’re all just the other side of the glass screens swinging their way through the enclosures at our height. Yet to them, they’re nearly ten metres off the ground. They certainly look like they’ve settled into their new home.

Sarah agrees. “They are really relaxed. They’re so calm and happy. They’re into everything and making the most of all the new space. As a result, they’re presenting more natural behaviour.”

One of the pileated gibbons suddenly swings across the window in front of us, then dashes up through the branches and trunks to the metal grid roof. He pulls something out and then swings back through the canopy, stretching to reach each new branch with opposite arms and hands, to a ledge, where he sits down and starts nibbling at his prize.

“This new enclosure allows us to scatter food on the rooftops,” Sarah explains, pointing up to where the gibbon has just been. “Not only does it mean that we can feed them without having to move them and disturb them, it’s also great for them too, because it’s natural for them to feed from the canopies.”

“How many times a day do you feed them?”

Trust my nephew to think about meal times!

“We feed them three times a day,” says Sarah, “but then they’ve got this feeding pod that’s on a timer and that can give them as many feeds as they want. They’re always snacking, but then in the wild that’s what they do.”

The food they’re given generally comes in pellet form, a bit like the dried biscuit food we give our cats and dogs, because it’s specially formulated to contain all of the right nutrients and minerals. But the zookeepers also augment this diet with fruit, green vegetables, root vegetables and brassicas.

“We weigh in one of those items every day from each category,” explains Sarah, “and it changes every day. So one day they might get strawberries for their fruit, then the next day they might get apples, then grapes. Then for a root vegetable they might get carrots, parsnips or swedes. The brassicas, such as cauliflower, broccoli and cabbages, are high iron foods.”

We all know how important diet is and, just like us, apes can develop health problems if they eat the wrong food. Studies around the world have shown that they can develop diabetes and heart disease, so careful monitoring is important. Healthy primates can live to a good age. Twycross’s oldest gibbon is Helmut, a pileated gibbon, who was born in 1980.

Monitoring the health of a gibbon isn’t easy, but zookeepers like Sarah are training the gibbons in a way that helps make this easier for the animals and the staff. It’s called operant conditioning, and there are keepers who spend time working with the gibbons through positive reinforcement. They encourage the gibbons to participate in activities, like standing on some scales, or opening their mouths and even holding out their arms. Every time they do this they’re given a tasty piece of fruit as a reward. Sometimes that might include a rare piece of banana!

“Hopefully,” says Sarah, “this means well be able to take blood pressure readings, and check their teeth. Recently the keepers have been getting conscious heart readings, so we can monitor them without having to catch them, which is less stressful for them.”

Ashley points to something glistening on the floor, way below us. “What’s that? It looks like a mirror.”

It is! It’s all part of the enrichment programme the zookeepers use to stimulate the gibbons mentally. Every afternoon, they do something to interest one or more of the gibbons’ senses in an intriguing way. The mirror stimulates them visually, getting them to consider their own reflections while also reflecting the light. On another day, keepers might scatter herbs and spices around the enclosure, or the place them on some paper, which the gibbons enjoy. There are also toys they can introduce that contain food, where the gibbons have to work out  how to extract the food, which keeps their minds active and alert.

Many of the items on the zoo’s enrichment programme are donated by the public. “We’ve got an Amazon Wish List,” Sarah explains, “and on that wish list are lots of different things that we would like for the animals to enrich them. It means that people can go on their computer and donate something to us. They buy something and it comes straight to the zoo.”

After dinner the zookeepers then have the job of bringing all the gibbons back inside, ready for bed, which is when some of them start misbehaving. “They’re just like children,” Sarah grins. “They love to see what they can get away with. When we’re trying to get them inside they’ll sit just inside the tunnel. Then, when we go to shut they gate, they’ll run out again!”

My nephew looks up at me. “I’m always good, aren’t I, Uncle Simon?”

I turn to Sarah. “Gibbon Forest is a wonderful place. Are you sure you don’t have any room for an extra cheeky monkey?”

Twycross Zoo is on the A444, 3 miles from Junction 11 of the M42, 3 hours from London, 2 hours from Manchester and 30 minutes from Birmingham.