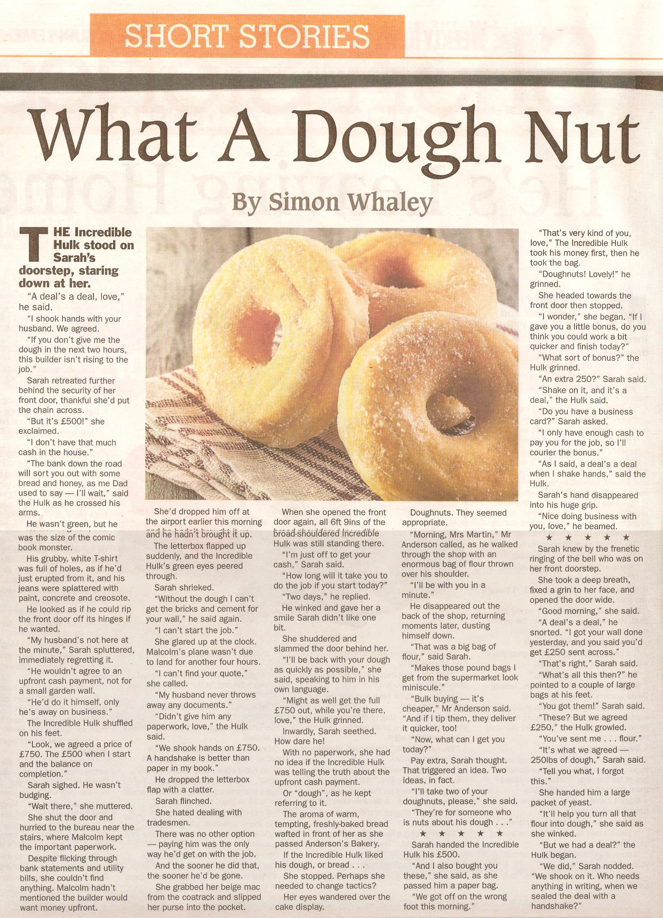 The Incredible Hulk stood on Sarah’s doorstep, staring down at her.

“A deal’s a deal, luv,” he said. “I shook hands with your husband. We agreed. If you don’t give me the dough in the next two hours, this builder isn’t rising to the job.”

Sarah retreated further behind the security of her front door, thankful she’d put the chain across. “But it’s £500!” she exclaimed. “I don’t have that much cash in the house.”

“The bank down the road will sort you out with some bread and honey, as me Dad used to say — I’ll wait,” said the Hunk as he crossed his arms.

He wasn’t green, but he was the size of the comic book monster. His grubby, white T-shirt was full of holes, as if he’d just erupted from it, and his jeans were splattered with paint, concrete and creosote. He looked as if he could rip the front door off its hinges if he wanted.

“My husband’s not here at the minute,” Sarah spluttered, immediately regretting it. “He wouldn’t agree to an upfront cash payment, not for a small garden wall. He’d do it himself, only he’s away on business.”

The Incredible Hulk shuffled on his feet. “We agreed a price of £750. The £500 when I start and the balance on completion.”

Sarah sighed. He wasn’t budging. “Wait there,” she muttered. She shut the door and hurried to the bureau near the stairs, where Malcolm kept the important paperwork. Despite flicking through bank statements and utility bills, she couldn’t find anything. Malcolm hadn’t mentioned the builder would want money upfront. She’d dropped him off at the airport earlier this morning and he hadn’t brought it up.

The letterbox flapped up suddenly, and the Incredible Hulk’s green eyes peered through.

“Without the dough I can’t get the bricks and cement for your wall,” he said again. “I can’t start the job.”

She glared up at the clock. Malcolm’s plane wasn’t due to land for another four hours. “I can’t find your quote,” she called. “My husband never throws away any documents.”

“Didn’t give him any paperwork, luv,” the Hulk said. “We shook hands on £750. A handshake is better than paper in my book.” He dropped the letterbox flap with a clatter.

Sarah flinched. She hated dealing with tradesmen. There was no other option — paying him was the only way he would get on with the job. And the sooner he did that, the sooner he’d be gone.

She grabbed her beige mac from the coatrack and slipped her purse into the pocket. When she opened the front door again, all six feet nine inches of the broad-shouldered Incredible Hulk was still standing there.

“I’m just off to get your cash,” Sarah said. “How long will it take you to do the job if you start today?”

“Two days,” he replied. He winked and gave her a smile Sarah didn’t like one bit.

Sarah shuddered and slammed the door shut behind her. “I’ll be back with your dough as quickly as possible,” she said, speaking to him in his own language.

He smiled. “Might as well get the the full £750 out, while you’re there, love,” the Hulk grinned.

Inwardly, Sarah seethed. How dare he! With no paperwork she had no idea if the Incredible Hulk was telling the truth about the upfront cash payment. Or “dough”, as he kept referring to it.

The aroma of warm, tempting, freshly baked bread wafted in front of her as she passed Anderson’s Bakery in the High Street. If the Incredible Hulk liked his dough, or bread …

She stopped. Perhaps she needed to change tactics? Her eyes wandered over the cake display. Doughnuts. They seemed appropriate.

“Morning, Mrs Martin,” Mr Anderson called, as he walked through the shop with an enormous bag of flour thrown over his shoulder. “I’ll be with you in a minute.” He disappeared out the back of the shop, returning moments later, dusting himself down.

“That was a big bag of flour,” said Sarah. “Makes those pound bags I get from the supermarket look miniscule.”

Mr Anderson smiled. “Bulk buying — it’s cheaper,” Mr Anderson said. “And if I tip them, they deliver it quicker too! Now, what can I get you today?”

Pay extra, Sarah thought. That triggered an idea. Two ideas, in fact. “I’ll take two of your doughnuts please. They’re for someone who is nuts about his dough…”

Sarah handed the Incredible Hulk his £500. “And I also bought you these,” she said, as she passed him a paper bag. “We got off on the wrong foot this morning.”

“That’s very kind of you, love.” The Incredible Hulk took his money first, then he took the bag. “Doughnuts! Lovely!” he grinned.

She headed towards the front door, stopped and then turned round. “I wonder,” she began. “If I gave you a little bonus, do you think you could work a bit quicker and get the job finished today?”

“What sort of bonus?” the Hulk grinned.

“Do you have a business card?”Sarah asked. “I only have enough cash to pay you for the job, so I’ll courier the bonus.”

“Nice doing business with you, love,” he beamed.

Sarah knew by the frenetic ringing of the bell who was on her front doorstep. She took a deep breath, fixed a grin to her face, and opened the door wide. “Good morning,” she said.

“What’s all this then?” He pointed to a couple of large bags at his feet.

“It’s what we agreed — 250lbs of dough,” Sarah said. “Tell you what, I forgot this.” Sarah handed him a large packet of yeast. “It’ll help you turn all that flour into dough,” she said as she winked.

“We did,” Sarah nodded. “We shook on it. Who needs anything in writing, when we sealed the deal with a handshake?”