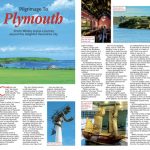 Simon Whaley enjoys a journey around this delightful Devonshire City.

‘Climb the oak tree,’ says the tourist guide, ‘but think laterally.’ She winks as she hands over a map of Plymouth city to help me explore. I have to admit, it’s been a few years since I last climbed a tree. But this wasn’t quite what I was expecting to do in Plymouth.

This Devonian city is sandwiched between two rivers – the Plym in the east and the Tamar to the west. It overlooks Plymouth Sound, a natural bay with deep water channels, perfect for commercial shipping and the Royal Navy’s warships and submarines.

The tourist centre is also home to the marvellous Mayflower Museum, with a great balcony on the third floor overlooking Sutton Harbour, Plymouth’s original port. The city’s fishing industry is still based here, commemorated by a large sculpture known locally as the Plymouth Prawn. It’s not like any prawn I’ve seen. It has what looks like the head of an angler fish, a cormorant’s feet, the fin of a John Dory, a lobster claw, and the tail of a plesiosaurus!

Nearby I spy the Mayflower Steps, one of Plymouth’s most famous landmarks. It was from here, in September 1620, that 102 pilgrims set sail on an ageing merchant ship called the Mayflower to start a new life in the New World, or North America as we know it today.

It was a challenging crossing, and the prevailing westerly winds meant it took them 64 days to cross the Atlantic, before they eventually arrived in America, near Cape Cod. They’d travelled over 2,800 nautical miles, but were 90 miles north of their intended destination. They docked in Provincetown Harbor, and later named the settlement they created, Plymouth. One year later, the pilgrims celebrated their first harvest in the New World with a three-day festival of thanksgiving, which has become one of America’s famous public holidays.

There’s a huge scale model of the Mayflower here in the museum. Is it made of oak? It’s not big enough to climb, so this can’t be the oak tree the tourist guide was teasing me with.

The Mayflower Museum sits in the Barbican area of Plymouth, one of the oldest sections of the city to have survived bombing during the Second World War. The streets are narrow, and cobbled. In fact, Plymouth has the highest concentration of cobbled streets in England.

Southside Street is home to Plymouth Gin, which is the oldest working gin distillery in England. My guide, Pippa, asks me to leave my camera in a locker, and instructs me to turn off my mobile phone. “When we enter the distillery,” she says, “the air may still contain alcoholic vapours, which could be ignited by electrical gadgets!”

And not just gadgets either. Just as I enter the distillery I have to grab a metal bar to make sure any static electricity in my body has been discharged too.

Pippa explains that the sailors drank rum, but the Royal Navy’s officers drank gin. Their original gin recipe dates back to 1793, and its 41.2% proof strength is down to navy regulations. These stipulated that no accidentally-spilt liquid should affect the flammability of gunpowder. Plymouth Gin’s 41.2% strength ensured the navy’s gunpowder still went off with a bang!

From the distillery, I’m taken upstairs to the gin bar, where it’s believed many of the original Mayflower Pilgrims spent their last night in Plymouth, when the building was a refectory, before it became a distillery.

A plaque on the wall lists all the pilgrims, but my eyes are sidetracked by the roof. It looks like an upturned ship’s hull. Is it made of oak? There’s no way to climb it, even if it is. This can’t be what the guide was referring to.

Back outside, the maze of tiny streets disorientates me, and I suddenly stumble across a narrow passageway between two houses, that leads to Elizabeth Gardens. Perhaps there’s an oak tree in here?

I pass through the dark passageway and emerge into an idyllically quiet oasis. The tinkling of a water fountain is the only sound I can hear. Low box hedges create a formal garden design, with plenty of seats to sit and relax in today’s unexpected sunshine. I spy a tree, but it’s not an oak, so it’s not what I’m looking for. Oak trees are large. Why can’t I find it?

These gardens were created in 1970, on derelict grounds where 16th century merchants houses once stood. Some of the stones used in the retaining walls were from bomb damage caused during the war.

All this exploring has me feeling peckish, so the smell of freshly cooked fish and chips draws me to the Harbourside Fish and Chip shop. Not only is there a huge queue outside, which is always a good sign, but they’ve won, or been shortlisted for, so many awards they must collect them by the boat load!

Now there’s an idea. Perhaps I might solve this conundrum by taking to the sea, instead.

Within minutes, I’m sitting onboard the Plymouth Adventurer, one of Plymouth Boat Trips’ many vessels operating around the city. I’ve opted for the hour-long harbour tour, and the friendly skipper is soon sharing his knowledge of the city.

We pass Drake’s Island, a 6.5-acre island in the middle of the Sound, which was originally called St Michaels after the chapel that had been built on it. It was later changed to St Nicholas island, but for the last century has been named after Sir Francis Drake, the English privateer who circumnavigated the world during the Elizabethan period. The island has been used as a French prisoner of war camp, but is now privately owned, and there are plans to turn it into a hotel and spa resort.

The boat continues up the River Tamar, which the skipper jokes, “is the dividing line between Cornwall on the left and England on the right!”

The Tamar is also home to the Royal Navy docks at Devonport, the largest naval base in Western Europe and the only place where the Royal Navy’s nuclear submarines can be repaired or refuelled.

It’s time to turn back, and the Plymouth Adventurer does this at Torpoint, where three chain-link ferries transport vehicles across the River Tarmar from Devonport to Cornwall. It used to be called Tarpoint, because in the days of wooden boats, the vessels would be floated at high tide from Devonport’s docks to the middle of the river, where at low tide they would then beach on the sandbanks here. While the tide was out the wooden hulls were waterproofed with tar.

I’m still looking for this oak tree as we pass the Royal William Yard, which is now a fascinating place of holiday accommodation, flats, offices, and restaurants. It used to be known as the Royal William Victualling Yard. Victual is the old English word for provisions, and this was the Royal Navy’s store cupboard. Everything a Royal Navy warship needed could be stocked here. The Grade I and II listed buildings are still all labelled with their function, including the bakery, cooperage (where barrels were made), slaughterhouse and brewhouse.

Soon we’re running past one of Plymouth’s most famous landmarks, The Hoe, which originates from the Anglo Saxon for ‘high ground’. It’s topped by the red and white striped lighthouse, known as Smeaton’s Tower. The view from the top must be amazing, so I decide that’s my next destination.

Smeaton’s Tower was originally built in 1756 as a lighthouse to stand on the Eddystone Reef, some 10 miles out to sea from Plymouth. However in the mid 19th century it was discovered that the rocks on which it stood were eroding. The decision was taken to dismantle it, block by block, and re-erect it on The Hoe.

A series of information panels in the Entrance Room explain the civil engineer’s history. Smeaton was the first engineer who pioneered the use of hydraulic lime, a cement that would set underwater. He gave his lighthouse strength by building it with a series of interlocking, dovetailed blocks of stone. And then I spot it. I’m in an oak tree!

Well, not an actual oak tree, but the tourist guide did say I needed to think laterally. John Smeaton’s lighthouse design has been copied by many other lighthouses, because it shaped like the trunk of an oak tree.

Chuffed I’ve now found the intriguing oak, all that’s left to do is climb the 93 steps to the lantern room, where the all-important light source was a chandelier holding 24 tallow candles. And what a view! Stretching from Dartmoor in the East, round to Mount Edgcumbe park and Cornwall in the west, it proves that Plymouth really is a picturesque place.

1. John Howland fell overboard the Mayflower during a storm and was almost lost at sea, but managed to grab the topsail halyards. It gave the crew enough time to rescue him with a boat hook. His descendants include Franklin D Roosevelt, George H W Bush, George W Bush, the poet Ralph Waldo Emerson and Humphrey Bogart.

2. Royal William Yard is home to largest collection of Grade I listed naval buildings in the UK.

3. There are 52 other Plymouths around the world, but Devon’s is the original.

4. An image of Smeaton’s Tower appeared with Britannia on penny coins up until 1970.

5. Plymouth had a pier near The Hoe, but it was firebombed during the war, and demolished in 1943.

Plymouth lies on Devon’s south coast, off the A38, 40 miles from the end of M5 at Exeter. It’s served by trains from London Paddington, Birmingham, Manchester and Scotland travelling to Penzance.