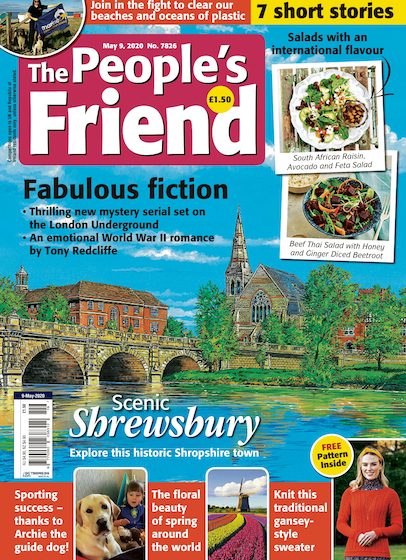 The latest issue of the People’s Friend has my feature about Shrewsbury in it and on the front cover.

Shrewsbury is my county town, but despite this it’s not somewhere I visit on a regular basis. In some ways, it meant that when I went along to take some photographs and do some research, I was able to look at it as a visitor might.

My article majored on the fact that Shrewsbury is the birthplace of Charles Darwin, something the town is immensely proud of. There’s a huge statue to him outside the library (which used to be Shrewsbury School, where Darwin was educated).

I have taken myself off to the library sometimes when I’ve needed peace and quiet in which to write, and it’s quite something sitting in the same building where Darwin was taught. (If you go upstairs to the top floor you can see where the naughtiest boys etched their names in the wooden window sills.)

Opposite the library is Shrewsbury Castle, with it’s glorious grounds. Take the minor path through the embankment opposite the Castle and you’ll discover Laura’s Tower.

From here, it’s a short stroll to the Dana, Shrewsbury’s Prison, where you can either book for a guided tour, or browse the venue at your own pace. That’s what I chose to do, although it was quite eerie wandering around. There weren’t many other people about, so every time I heard a door bang it made me jump!

There were hangings at Shrewsbury Prison, and these were held at 8am. So to ensure he was there, the executioner would stop the night before. I was shocked to find that the Executioner’s Bedroom has no window! Even the prisoners got a room with a window!

Near the river is an amazing sculpture called Quantum Leap, which was commissioned to celebrate Darwin’s life, and mark the bicentenary of his birth. It caused a bit of a store at the time because it went over budget. What was estimated at £200,000 eventually became over £1,000,00 – thanks to an awkward tree root on the riverbank, apparently! And some locals call it ‘The Slinky’ after the popular children’s toy. What do you think?

Shrewsbury has another famous lad. Not born here, but a long-serving employee of Shrewsbury & Atcham Borough Council. A certain Percy Thrower, of BBC GArdener’s World and Blue Peter fame, worked at the authority’s Parks & Gardens devision, and spent many years as Head Gardener. He helped turn Shrewsbury into the floral town that it is, with the Quarry Gardens, in the Dingle being one of the jewels in its floral crown.

In sight of the The Quarry is St Chad’s Church, which is where Darwin was christened, as a baby.

And what might be surprising is the name on one of the headstones to be found in St Chad’s. Do you recognise it?

Actually, it’s a film prop. It was put there as part of the 1984 adaptation of A Christmas Carol, played by George C Scott. It’s actually a real headstone, several centuries old, where the original carving had worn away. Work had to be undertaken to try to trace the ancestors of the deceased to seek their permission.

Shrewsbury has had a bit of a rough time recently. It flooded at the start of 2020, and just as it was recovering the Covid-19 pandemic and its implications arrived. But when the restrictions are eventually lifted, do consider visiting Shrewsbury. It’s full of wonderful character and characters!

For more information about what to see and do when visiting Shrewsbury, take a look at the official tourism website: Original Shrewsbury.