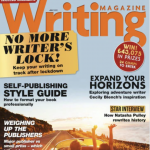 When it comes to finding a traditional publisher, does size matter? Simon Whaley chats to two writers about their experiences.

On 1st July 2013 a new publishing conglomerate was born: Penguin Random House (PRH). It brought together the Pearson-owned Penguin Group with the Bertelsmann-owned Random House to create the world’s biggest publisher. Then in November 2020, PRH announced plans to merge with Simon & Schuster. The biggest could be getting bigger.

With conglomerates growing ever larger, and new smaller, independent publishers launching all the time, knowing which publishers to approach can be confusing. If your dream is to be published by a traditional publisher, which is best for your writing business: targeting one of the big five mega-publishers, or approaching a smaller independent? Signing with a large publisher could make you an insignificant fish in a large ocean. Whereas, could signing with an independent publisher leave your book fighting for shelf space in a market dominated by PRH, Pan Macmillan, Hachette and Harper Collins?

I’ve been published by both large and small publishers, so I’ve seen both sides of the story. I’ve often wondered if the reason my first book, One Hundred Ways For A Dog To Train Its Human, sold 100,000 copies in three months is because the Hachette group who published it had the financial muscle to negotiate with book retailers about positioning it by the till points in their stores.

However, when the much smaller How To Books (later part of the Little Brown Group) published my Fundraising For A Community Project, I was amazed at how hard the publicity team worked at getting me on local radio stations all around the country to talk about the book.

Agent Accessible
The biggest barrier to securing a traditional contract with one of the larger publishing companies is that most only accept agent submissions. Occasionally, there are small windows of opportunities where they may consider unsolicited author approaches, but most editors at the big five publishers insist on submissions via a literary agent (especially for fiction).

Elaine Everest (www.elaineeverest.com) is the bestselling author of The Woolworths Girls series, published by Pan Macmillan, and they’ve recently published her latest novel, A Mother Forever. As Elaine explains, often it is the relationship between an agent and the various editors they know at the larger publishers that influences which publisher they approach.

‘I have my literary agent, Caroline Sheldon, to thank for taking me on and approaching commissioning editor, Natasha Harding who, at that time, worked at Pan Macmillan. Natasha loved the premise of The Woolworths Girls and offered me a two-book contract. Caroline is a very supportive agent and knows the publishing world inside out. I’ve been very lucky and still pinch myself.’

For Elaine, being published by Pan Macmillan has had a tremendous impact upon her career as an author, and her writing business. It’s helped her achieve her writing dreams.

‘For me it was seeing my books in supermarkets,’ she explains, ‘who by far are the biggest seller of paperback books. I had always wanted to be traditionally published, so it was a dream come true. Being an author with one of the ‘Big Five’ publishing houses means earning a decent living as a writer and having a team behind me who market and promote my books to the best of their ability. The team is open to new book and series suggestions and work hard to develop our careers. I’m also fortunate to have a fab PR team at EDPR Ltd who promote my books. I’d be lost without them.’

Strong Team
Despite being one of Pan’s many thousands of authors, Elaine feels part of the Pan Macmillan team, benefitting from author gatherings and training events. ‘I’m treated very well, and Pan Macmillan value me as an author with flowers on publication day. We have an annual author get together and in the past women’s fiction authors have enjoyed parties at the Oxo Tower and also the St Pancras Hotel in London. I also enjoyed a social media training day and got to meet other authors who were with the publisher at that time.’

Since she began her writing business, Elaine has worked with publishers of various sizes, and feels that for her, bigger is most definitely better.

‘For me, it is important to be published by one of the Big Five. I’ve experienced smaller publishers and not been happy with how they’ve promoted my career. I’ve been a freelance writer since 1997 working in journalism, non-fiction books, novellas, and short fiction, and like to think I have a professional working attitude. I expect the same from those who contract me. I’ve mainly found that happens with larger publishers.’

‘I’d been a self-published author for many years,’ she says. ‘After approaching various agents and publishing houses and getting turned down, I decided to turn my attention to building my self-publishing career instead, and managed to build it up to the extent that I became a full-time author. Boldwood approached me and said they would like me to join their team of authors.’

What appealed to Heather is the flexibility Boldwood offered with her writing business. And she soon realised that although they were relatively new as an independent publishing business, the staff there were all experienced professionals.

‘I really liked what Boldwood had to say. Publishing with them would mean I could still continue with my self-published work. Boldwood went out of their way to ensure that signing with them wouldn’t interfere with that work, and it hasn’t. I also really loved their attitude to publishing. They are very much about keeping the author involved in every step of the publishing process, which some publishers don’t do.’

People Power
‘Boldwood may be a young publishing house,’ she continues, ‘but the wonderful people who work in it are extremely experienced in the industry, with years working for the bigger publishers. They know everything there is to know. When I had my first meeting with them, I realised I knew absolutely nothing about marketing. They were asking me if I’d done this or that, and I said no to everything! I’m amazed anyone knows about my self-published work because I realised I’d done absolutely nothing to promote it. I knew that signing with Boldwood could only enhance my career and that I could learn so much from them. Also, they are such lovely people!’

Heather is delighted with the successful publication of her first novel with Boldwood, Blood Brothers. As a self-published author, she’s always had complete control over the publication process, and so she was unsure of what the process would be like with Boldwood. It turns out she needn’t have worried.

‘I really enjoyed the entire process of publishing Blood Brothers. It was a completely new way of working for me with editors, copy editors, and proofreaders. I was involved in every single step. I even had input with the cover and I got to choose the narrator for the audiobook, the very talented Angus King, who brought the characters vividly to life. On the day of its release, Blood Brothers went into the top 100 on Amazon! Blood Brothers is still selling very well, has over 400 reviews and it’s introduced new readers to my work, so that’s wonderful.’

Close Connections
Being with a smaller publisher, Heather feels part of the publishing team. ‘I feel very closely connected to Boldwood. As they’re a smaller team, I know who I can approach if I ever need anything and they are always there for me if I need them. It’s great having that support after working alone for so long.’

‘They’ve also set up a Facebook group just for the Boldwood authors, so we can support each other, chat among ourselves and ask for advice, as Boldwood has some very experienced authors. It’s like being part of a family and it’s so reassuring knowing I have that backing.’

Heather’s experience has been extremely positive, which she puts down to doing some research beforehand, something she recommends all authors so.

‘Before contacting a smaller publisher, check out who the team is and what experience they have. I am aware of some independent publishers that are run by people with very little to no experience in the industry. However, if you find a publisher, like Boldwood, with years of experience, then don’t let the fact that they are smaller and independent hold you back from approaching them. Every big publisher started out small! It’s fantastic not only watching a publisher go from strength to strength but being a part of that journey too.’

When sizing up potential publishers, don’t just consider how big or small the company is. Think about what you want from the publisher. For Elaine, seeing her books in supermarkets was important, yet for Heather it was the flexibility of being a hybrid author and being able to continue with her self-published writing, too.

Finding the right-sized publisher is all about teaming up with the one that helps you fulfil your writing dreams.