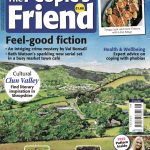 My Clun Valley feature is the front cover feature of the latest issue of The People’s Friend. Although a quiet corner of Shropshire, there’s a lot going on there, and it’s easy to spend a whole week exploring the delights the valley has to offer.

AE Housman’s poem, A Shropshire Lad, epitomises the Clun Valley in the lines:

Are the quietest places

A Shropshire Lad by AE Housman

Heading west from the A49 at Craven Arms, the first village is Aston on Clun with its wonderful Arbor Tree.

The tradition of decorating the tree with flags goes back to Arbor Day, and it’s a tradition that the village celebrates still to this day.

Further along the valley is The Hurst, which is now a residential writers’ retreat run by the Arvon Foundation. The house has an incredible literary pedigree, for it used to be the home of the playwright John Osborne. Occasionally, they throw open the house and gardens for charity, and a couple of years ago I took a sneaky peak round.

If ever you get an opportunity to explore (or even go on one of the Arvon Foundation’s writing courses) then look out for the Oscar statue inside.

John Osborne is buried, alongside his wife, in St George’s churchyard in Clun.

One of the most picturesque spots in the entire valley is of the old stone bridge across the River Clun in the centre of the village. It’s beautiful at any time of year, but in spring when the blossom is out, it looks idyllic.

There’s a wonderful set of almshouses in the village, although you’ll need to wander off the main roads (quite easily done in Clun). Originally built as Trinity Hospital by the Earl of Northampton, today they’re a quiet retreat for residents. (Note: the almhouses are private, only the grounds are open to the public.)

They weren’t always quiet. According to local information, two of the residents had quite a reputation: Joe Weale (known as Joe the Bear) and Billy Cantie. Such are the sheenanigans they were involved in, if you explore the grounds you’ll spot the wonderful statue there is to them.

Further up the Clun valley is the isolated village of Newcastle-on-Clun. If you wander along the lane (towards Offa’s Dyke) you’ll pass the church and its unusual lychgate. Unlike many that are hinged at the side, the one here pivots in the middle.

In addition to AE Housman’s connections with the valley, other literary links include:

So, as you can see, for a quiet valley on the Welsh Borders, it’s punched above its weight in the literary world!